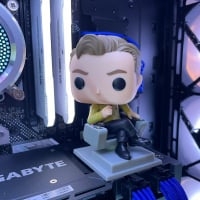 June 11 in Off Topic

I remember back in ye olden days of dial up modems and terminal windows you would log into a use group to argue 1 of 2 things, Mac Vs PC and Star Trek Vs Star Wars. I'm happy that in these times both debates can be had still. I'm on Team Both, because it IS possible to like both. But at this time I'm happy to see that there is NEW Star Wars and Star Trek content out there to ingest. But what has me most excited right now is Star Trek: Strange New Worlds. The stories are great and the filming and effects are awesome. I've also been watching Kenobi, this all certainly beats the days of putting a VHS tape in the ole VCR. What other great things are people watching out there?