The Threadripper 3990X series will require a motherboard with the TRX40 chipset and sTRX4 socket.

Will I need a BIOS update for my motherboard to use the new 3990X?

A BIOS update should not be required to POST; however we suggest you visit the motherboard manufacturers website and verify this on the CPU Support list. You should update your BIOS to maximize performance and stability.

Here are links to the CPU support lists for the boards listed above:
Asus ROG Zenith II Extreme:
https://www.asus.com/us/Motherboards/ROG-Zenith-II-Extreme/HelpDesk_CPU/

What are the cooling requirements for Threadripper 3990X series?

Minimum recommended requirement is a 240MM AIO (All-In-One) water cooler. With that in mind, we recommend using a 360MM AIO or a custom water loop with appropriately spec’ed pump. With PBO(Precision Boost Overdrive) you will get better performance with better thermals.

What memory speeds are supported?

Official memory speeds up to DDR4-3200 are supported. You can overclock your memory and 3600MHz is optimal for 1:1:1 ratio between the memory clock (mClk), memory controller clock (uClk) and Fabric clock (fClk).  While you can go higher than this, it’s not recommended due to the impact it may have on performance and stability. Keep in mind that memory rated at DDR4-3600 will contain a profile that you can load from the BIOS. This is referred to as a DOCP or XMP profile and this will apply the voltage, frequency and latency settings for you.

MSI: Change this under Settings > OC > A-XMP. Select the profile. Choose profile one. There may be two. Generally the second profile is a low latency rather than high frequency profile.

Gigabyte: Change this under the “Tweaker” menu. Change “Extreme Memory Profile(X.M.P) to profile one.

What are the power supply requirements?

The minimum is an 850W. We would recommend a much higher wattage power supply as this will increase drastically when you add peripherals as well as when the system is under heavy load. We used a 1600W PSU in our builds.

Here is a link to the PSU we used on our build:
https://www.microcenter.com/product/457347/evga-supernova-1600w-watt-80-plus-titanium-atx-fully-modular-power-supply

Will I need more than one EPS12V power cable connected?

Yes, you will need to connect two EPS12V 8 pin’s for CPU power. Some motherboards have additional EATX12V headers for additional CPU power.
We attached a picture below with the three connectors highlighted. 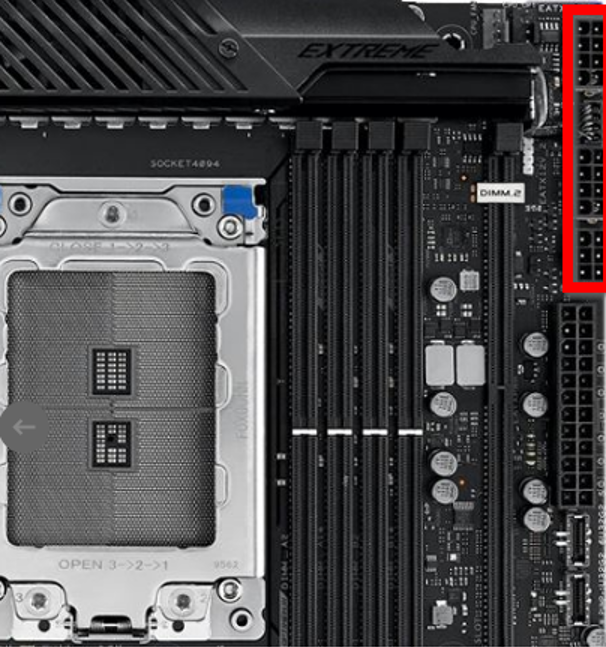 How many PCIe lanes are supported on this platform?

The Threadripper 3990X series supports PCIe Gen4. Gen4 effectively doubles the throughput of PCIe Gen 3. There are 88 PCIe lanes total: 56 from CPU, 16 from the chipset. The remainder are reserved for chipset to CPU communication.

Here is a link to an article that explains why a large number of PCIE lanes can be extremely important:
https://www.velocitymicro.com/blog/what-are-pcie-lanes-why-do-they-matter/

CCD stands for Core Chiplet Die. Ryzen and Threadripper CPU’s are divided into core complexes. The Threadripper 3990X has 8 CCD’s, each containing 8 Zen 2 cores. Understanding CCD’s can be instrumental in obtaining a more efficient overclock.

What is the SMU?

System Management Unit. This is the central controller of the Infinity Fabric.

What is Infinity Fabric?

Infinity Fabric is an architecture that controls interconnectivity and data processing between all the components of the CPU.

Here is a link to a document on the Infinity Architecture from AMD:
https://www.amd.com/system/files/documents/LE-70001-SB-InfinityArchitecture.pdf

System on a Chip. All of the components are combined into the CPU. Memory controller, PCIe and other features referenced by the IOD are controlled by the CPU.

The 3990X is built as a workstation CPU. For rendering, 3d modeling and heavy computing tasks. For gaming, it will handle anything that you can throw at it, 75% of the core complexes likely won’t even be utilized.

What applications is the 3990X designed for?

Windows supports 2 physical CPU’s and up to 256 logical cores on a 64 bit OS.

It can and with Precision Boost Overdrive it will do this for you, based on temps and demand on the CPU. It can also be manually overclocked in the BIOS or via Ryzen Master.

Does the 3990X need to be watercooled?

Yes, AMD recommends a minimum 240MM AIO. We would recommend going well beyond this. A custom water cooling loop, 360mm or larger radiators and a DDC, preferably D5 pump.

How much RAM do I need and does it require quad channel RAM kits?

The amount of RAM depends on what you need for the work your utilizing it for. For 3D modeling and heavy rendering 32GB is generally a minimum. Quad channel memory support is a feature of this platform. It is not required, but it will double your bandwidth. Highly recommended.

You don’t need to but it can offer you considerably higher transfer speeds. We have tested our Inland GEN4 M.2 at 5GB/s read and 4.2GB/s write. GEN4 has enough bandwidth that you can see 100% performance gains in RAID 0 setups. 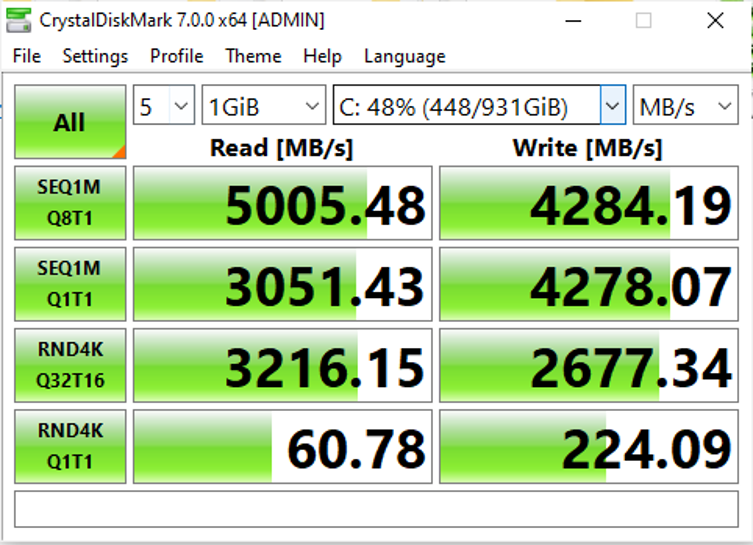 Clock speeds are 2.90Ghz stock and up to 4.3Ghz on demand with AMD’s Turbo Core. More significant is the amount of cores and threads to spread the work load across. We have conductive an extensive review with benchmarks located here: https://community.microcenter.com/discussion/2279/amd-ryzen-threadripper-3990x-review

I see many different kinds of memory such as dual channel and quad channel with various capacities, speeds and latencies. What works best with my 3990X processor, and is it okay to mix brands?

Memory sold as dual or quad channel simply certifies that each DIMM is binned to work alongside one another in that configuration. You can use multiple dual channel kits and run them in a quad channel configuration, however we recommend quad channel kits to make sure each DIMM is binned to perform equally. For capacity, we recommend at least 128GB of RAM for the 3990X due to it’s many cores/threads. We recommend using a 3200mhz kit that has been verified to work on the board. Consult the motherboards Qualified Vendors List: https://www.asus.com/Motherboards/ROG-Zenith-II-Extreme-Alpha/HelpDesk_QVL_Memory/. You can mix brands and it may work, however we do not recommend doing so as different brands may use different DRAM manufacturers, and the different types of DRAM require different subtimings. Mixing brands can result in instability or a performance penalty.