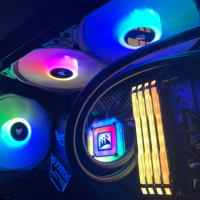 Camco ✭
March 2020 in CPU's, Memory and Motherboards
So, I recently bought a pre-built, as my options were limited to how I got my new PC. I've many in the past, but hard times makes decisions a little more complicated. Anyways...

So I got the PC delivered on Friday the 28th. Hated the layout of the case and the sketchy CPU, so I swapped them with parts I already had (Fractal Meshify C and a EVGA 750 G+ psu) Over the course of the weekend I was monitoring temps/speeds via CPUID and CPU-Z and noticed that my CPU is running almost constantly at 4.5ghz to 4.9ghz. This concerned me given the 9700k is supposed to be clocked at 3.6ghz and I have not done any overclock. For cooling, it is some cheap CoolerMaster 120mm AIO. I currently have 3 120mm intakes, and 3 120mm exhausts.

Motherboard is an ASUS Prime Z390-P. I went to see if anything was set to OC, but I could not find anything, but maybe I am missing something. Any help would be appreciated as, I already ordered some better fans in hope to help combat this overheating issue, and not trying to spend even more on this system.

Additional info: CPU idles at 28-40c at 21.1C ambient. When gaming, my CPU was hitting 96C playing The Division 2 and Modern Warfare, before I shut it down.