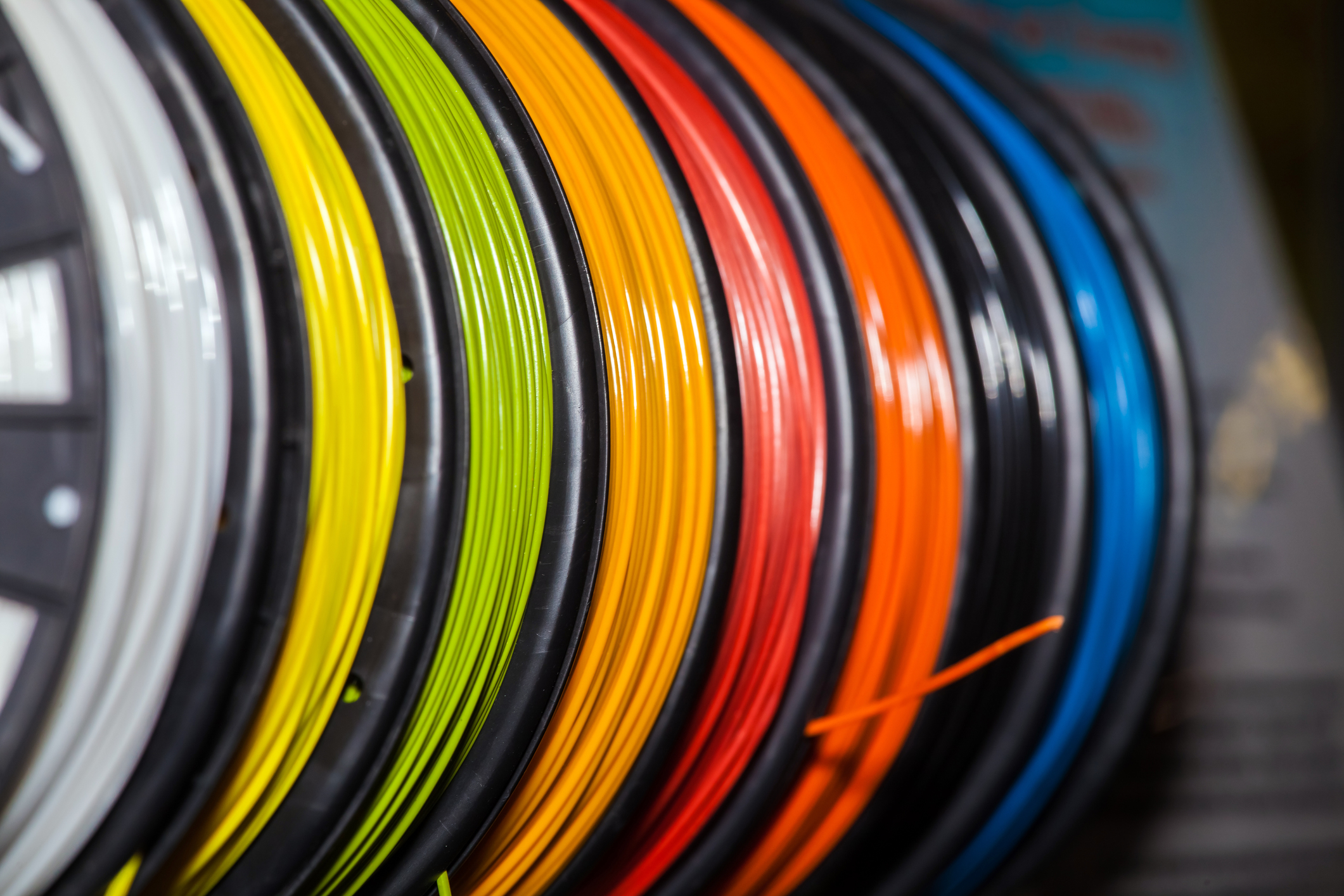 3D printers have quickly risen in popularity in recent years, with more than 1.4 million 3D printers shipping in 2018 alone. As the 3D printer market has grown, many new 3D printer enthusiasts have found themselves a bit confused when it comes to 3D printer filament - knowing the difference between filaments and knowing which one is best for their particular 3D printers. Today, we’ll be discussing 3D printers, different types of filament, and helping you decide which type of filament is best for your 3D printer.

What is a 3D Printer? 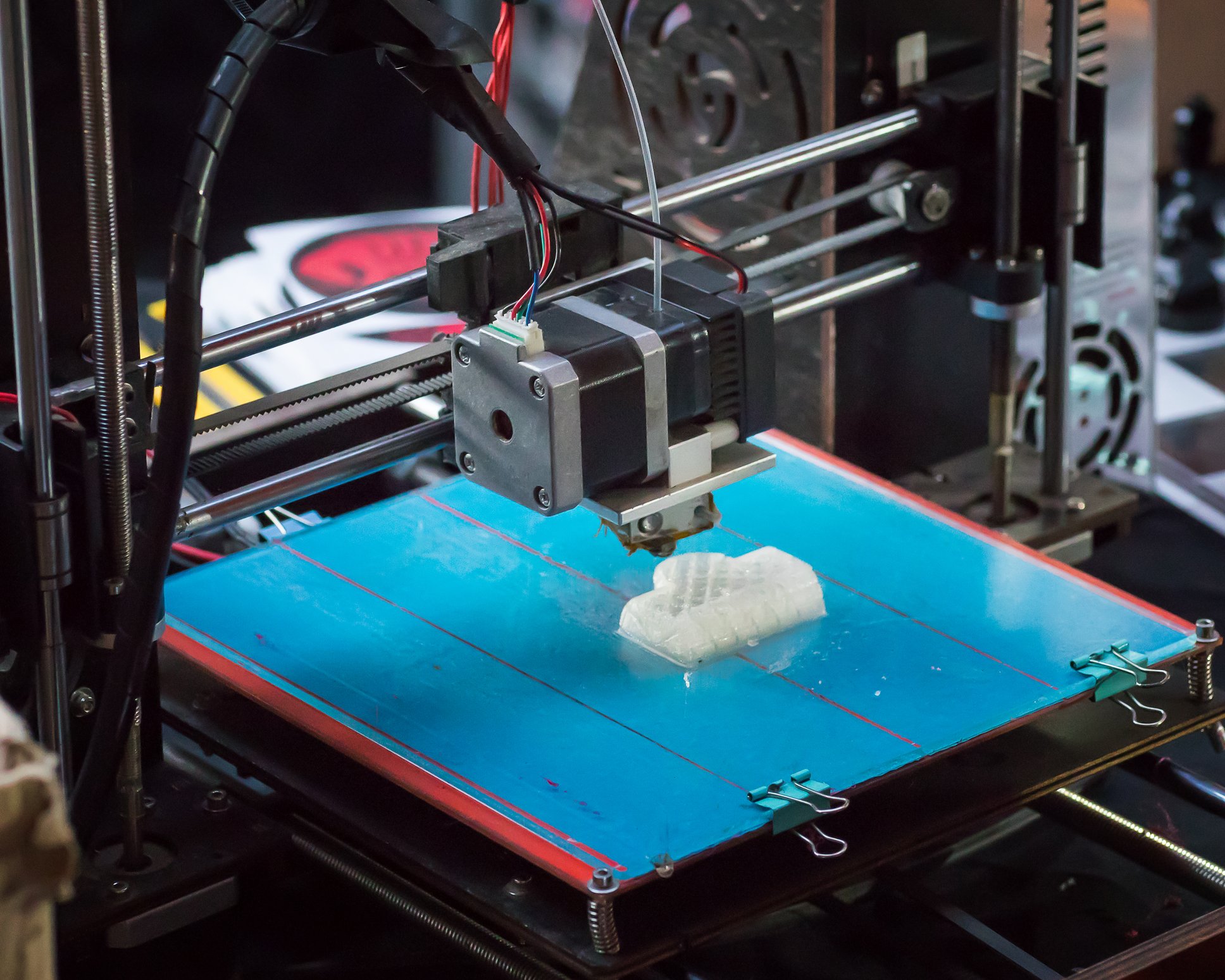 3D printers create three-dimensional solid objects from a digital file. The creation of 3D printed objects is achieved through something called additive processes, which involve laying down successive layers of material until the full 3D object is created. 3D printing enables users to create complex shapes and objects, all whilst using less material than traditional manufacturing methods, creating endless possibilities for printing.

In recent years, 3D printers have gotten more and more affordable, with many models being as cheap as $300 or less. They are relatively easy to use and maintain, and by far the most expensive part of owning a 3D printer is dealing with the 3D printer’s filament. Which is why knowing what filament works best for you can help save money and headaches.

If you're looking for a more in-depth look at 3D printers, be sure to check out our Choosing a 3D Printer guide!

3D printer filament is the material that is used by a 3D printer to print objects. Printer filament is to 3D printers as printer ink is to traditional printers. Printer filament comes in all sorts of different shapes and sizes and can vary quite a bit in price, size, color, weight, and toxicity levels. Whilst there are many different filament types available, the two most common types of filament are ABS (acrylonitrile butadiene styrene) and PLA (polylactic acid). Most basic 3D printers have been designed to use one of these two types of filaments, so these are really the only two that you need to know much about.

In terms of weight, filament is sold in spools that range from 0.5 kilograms to 2 kilograms. The filament comes in two thicknesses, either 1.75 millimeters or 3 millimeters. Most filaments, however, are of the 1.75-millimeter variety. With this said, let’s take a look at the different types of filaments starting with ABS and PLA. 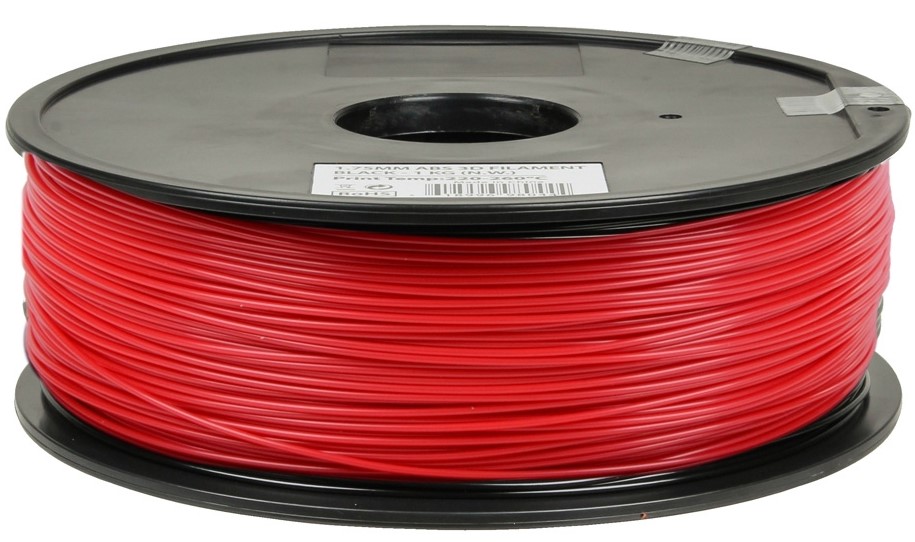 ABS filament is one of the most common filaments around and is the same plastic that LEGOs are made out of. The filament is as popular as it is because everything printed with it is nontoxic and very durable. The filament has a fairly high melting point, ranging from 210 degrees to 250 degrees Celsius. The downside to using this filament is that ABS tends to emit a rather unpleasant odor while printing, so if you should probably plan on printing in a well-ventilated room if using this filament. In addition, the bottom corners of this filament have a knack for curling upward just a bit, especially if using a non-heated printing bed. 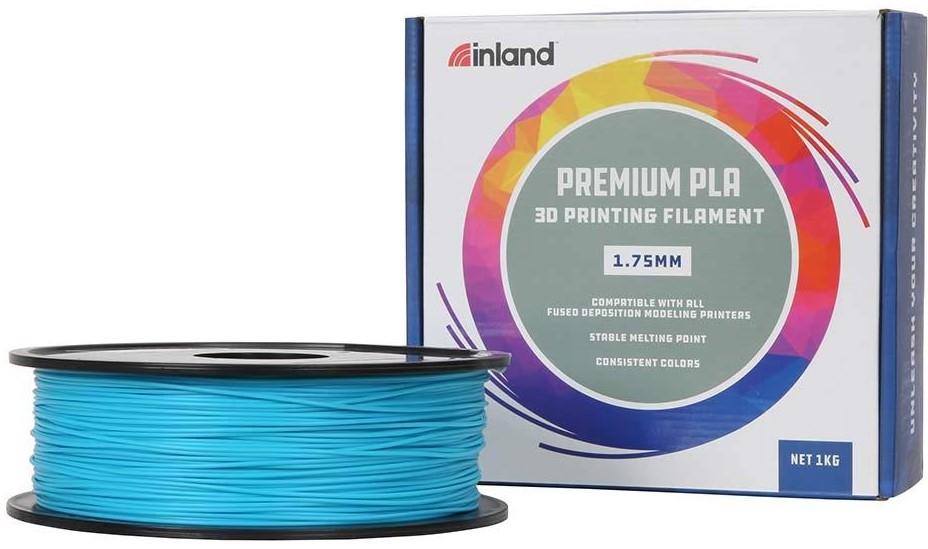 PLA filament, comparatively, has a lower melting point than ABS, ranging between 180 degrees and 230 degrees Celsius. One huge plus of this filament is that it is plant-based and biodegradable, something that can’t be said about other 3D printer filaments. Additionally, PLA filament is harder than ABS, prints without any warping, and is just overall generally easier to work with than ABS. 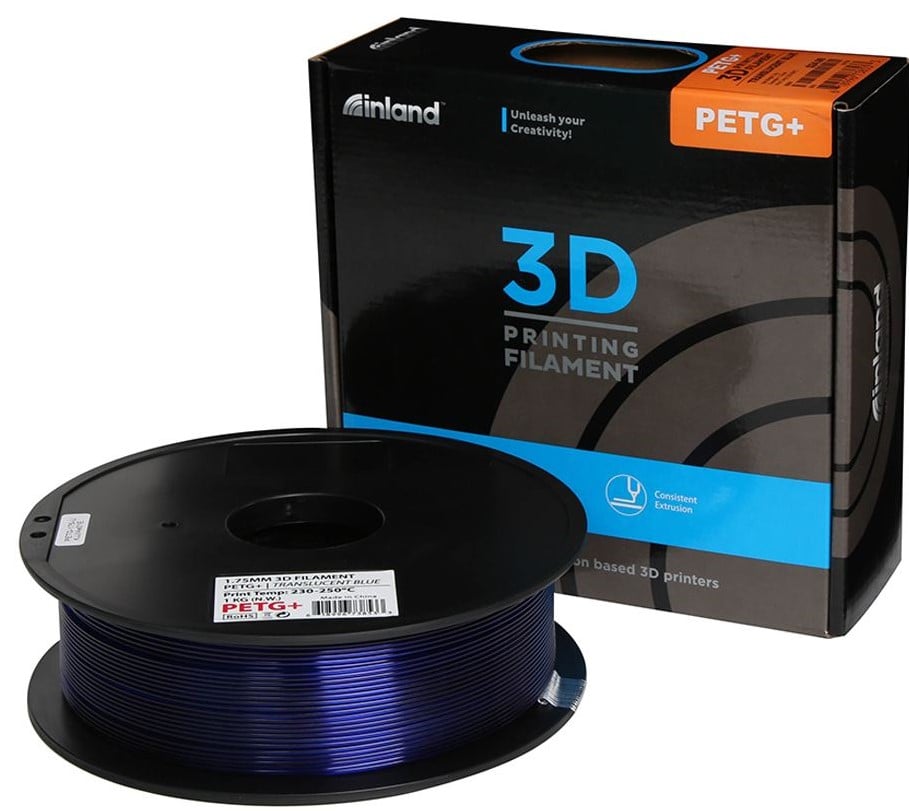 PETG (polyethylene terephthalate mixed with glycol) is a thermoplastic polymer that is most commonly used for drink bottles. PETG became quite a bit more popular during the coronavirus epidemic as it can be easily sanitized and, as a result, has been very useful for medical applications like face shields. PETG filament is resistant to water and very high temperatures (with a very high printing temperature that ranges from 230 to 250 degrees Celsius). Additionally, it has good electrical properties, has stable dimensions, and is incredibly sturdy.

One big difference that PETG filament has from both ABS and PLA filaments is that it can only be printed while using 3D printers that have fully enclosed printing spaces. PETG has the strong durability of ABS and the easy printability of PLA filaments, so as a result, it’s not surprising that it is one of the most popular among professionals looking for reliable filament. 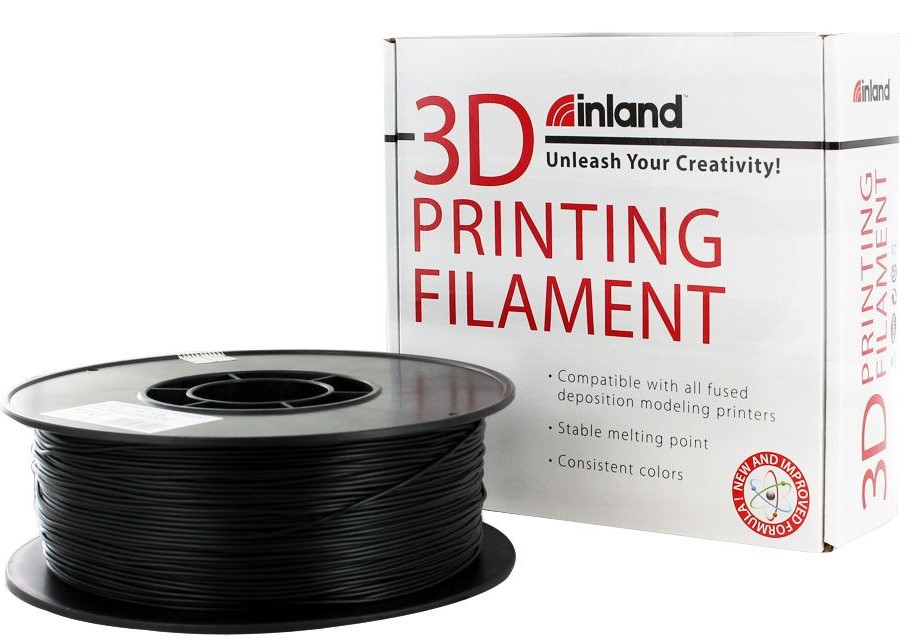 TPU filament, or thermoplastic polyurethane, is perhaps the most unique of all of the 3D printing filaments, with its defining characteristic is incredible flexibility. In addition, TPU is resistant to abrasion, oil, chemical, and wearing, which makes it a perfect fit for use in the automotive industry. In addition to being very resistant to high temperatures, it is also resistant to very low temperatures as well, meaning that it won’t become brittle and harder to work with in the cold.

The downside to using TPU filament is that, due to its flexibility, it's not as easy to print as other filament materials. Like PETG, TPU filament is also required to be printed within an enclosed 3D printing space.

Which 3D Printer Filament Should I Use? 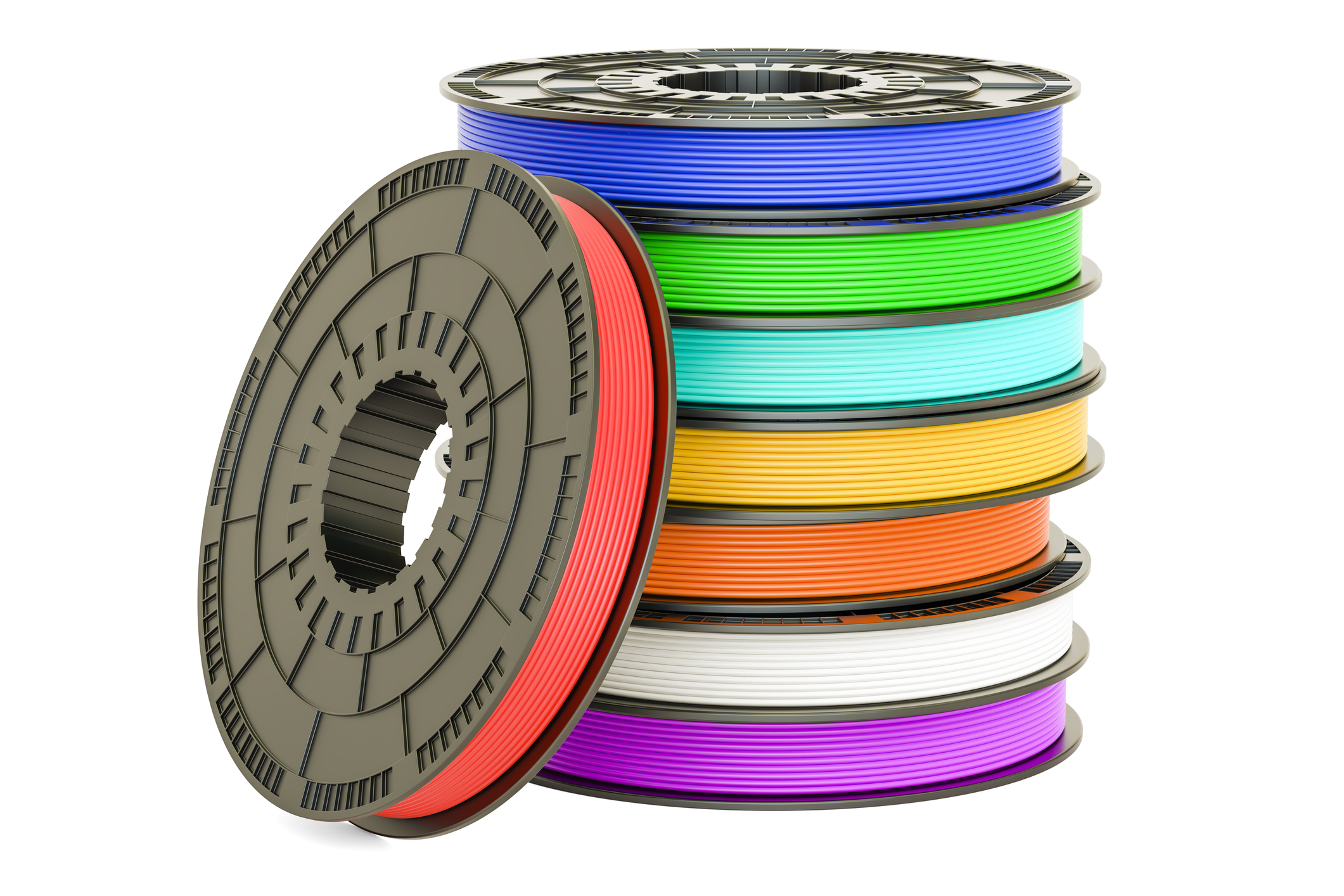 From there, figure out what type of objects you’d prefer to print. If you want to print something that is more durable and you own a printer with an open space, then ABS filament will probably be your best pick. If you’d rather print something that is biodegradable, then PLA is the option that you should go with. If you have a 3D printer with an enclosed printing space and want to print something that’s highly durable and won’t warp over time, then PETG is the option for you. And if you’re looking to create 3D objects that have more flexibility to them, then TPU filament is your best choice.