What Is The Platinum Collection: Dell

Dell has been one of the most iconic laptop and desktop PC brands for decades, with wide ranges of lauded business-focused systems, high-end gaming laptops, and svelte, industry-leading Ultrabooks. That makes it a perfect brand for the Micro Center Platinum Collection. Dell PCs come packing the latest and greatest hardware for maximum value for money, whether you’re looking for a portable work machine, or something a little more heavy-hitting for gaming.

It joins a number of other excellent manufacturers, including Asus, Lenovo, MSI, and HP, all of whom meet the criteria of high-quality, well-trusted, and great value, making them a great fit for the Platinum Collection. Amidst the dizzying array of PCs, laptops, and components that you can buy on Micro Center’s website and in-store, the Platinum Collection is the best way to streamline your purchase to products that have been vetted and tested and found to offer some of the best bang for your buck.

If you want a quality gaming PC without the headache of sifting through all of the many options out there, buying a desktop PC or laptop from the Micro Center Platinum Collection is a great way to make your choice easier. 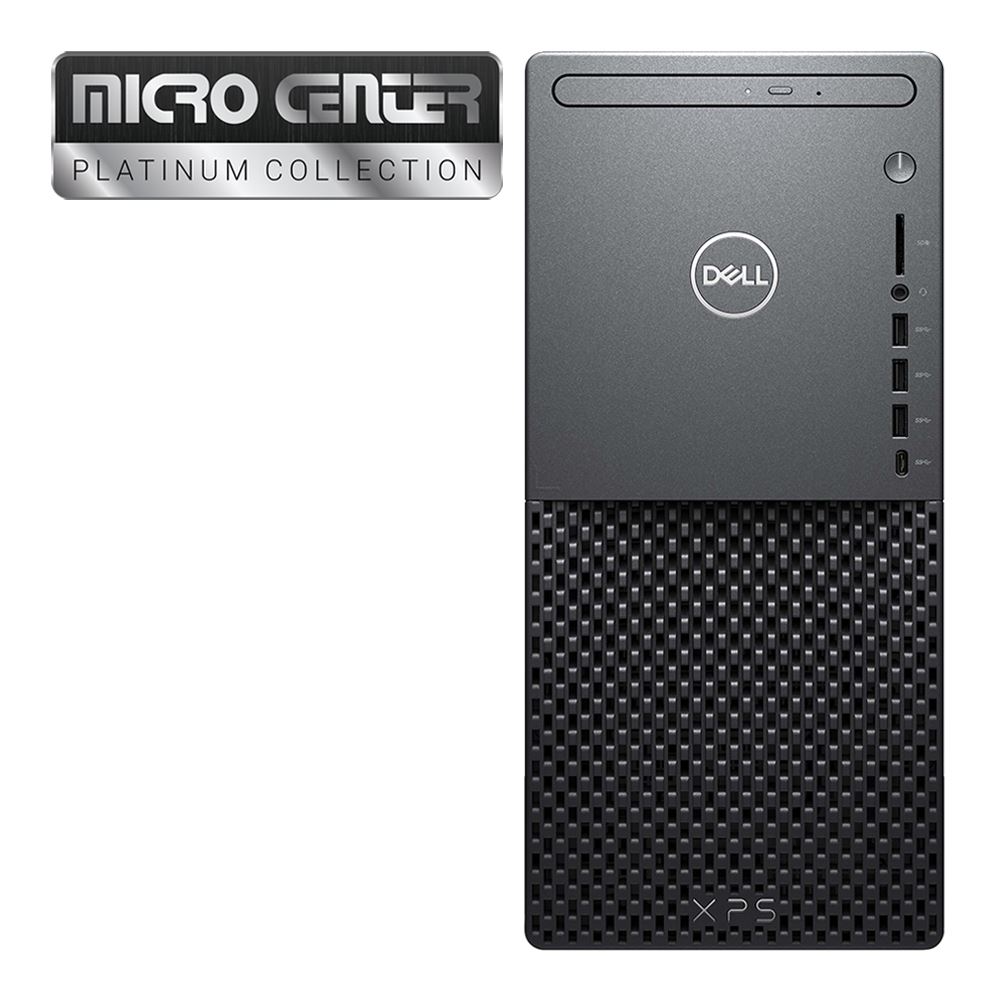 Dell’s XPS branding might be most well-known for encompassing some of the best mainstream laptops money can buy, but it also includes some truly stellar affordable gaming PCs, too.

One of the best examples of that is the Dell XPS 8940, a gaming PC that packs some of the latest generation components for high-end gaming performance, alongside a great feature set of connectors, inside an understated, classy chassis. It doesn’t scream “gamer” to look at, and that could be a good thing if you’re trying to fit this into a home office or bedroom without filling the space with colorful LED light.

The official specifications for the XPS 8940 are as follows: The heart of the system is the Intel Core i7-11700 CPU. It's an eight-core, 16 thread processor with massive general compute and gaming performance. It might have a base clock of 2.5GHz, but it features a maximum turbo frequency of 4.9GHz, which guarantees stupendous performance when performing intense, sustained tasks, like gaming, video transcoding, and photo editing.

This is the non-K, 11700, so you can’t manually overclock it, but this generation of processors does run a little warm, so that’s for the best in this case, and Intel’s own boost algorithms make manual overclocking much less important than it once was. The CPU cooling in the Dell XPS 8940 is more than good enough to keep it nice and cool throughout operation, ensuring that you get maximum performance whether you’re using your gaming PC for a few minutes or a few hours.

It’s nice and quiet too, so if you prefer to play without headphones, you won’t have to listen to the whine of overspinning fans.

This is no F-model processor, however, so it comes fully equipped with Intel’s 12th-generation integrated Xe graphics. That won’t find much use with the excellent dedicated 3060Ti GPU that this Dell gaming PC comes packed with, but it does mean that if you ever have to do some troubleshooting, or need to remove the GPU for whatever reason, you can still use the PC without difficulty. Just plug your monitor into the motherboard’s HDMI or DisplayPort outputs and away you go.

The real gaming power of this PC comes from its graphics card, the Nvidia RTX 3060 Ti; one of the best value for money GPUs of its generation. It offers stellar performance that eclipses all but the best graphics cards of recent years, delivering fantastic performance in any game at 1080p, 1440p, and in older games, even 4K.

If you do stick to 1080p, you can guarantee anywhere between 60 and 100 FPS in modern AAA games like Metro Exodus, Cyberpunk 2077, and Assassin’s Creed Valhalla. If you’re an esports player, you can expect far higher frame rates too, easily measuring in the hundreds. If you’ve been languishing on lower frame rates, that can make you more competitive, too. Higher frames mean lower input lag, and by cutting the input lag of your gaming PC, you can make yourself the best gamer you can be.

If you prefer to play slower-paced, AAA games, you also have the option of turning on ray tracing in supporting titles. Like all GPUs, that can hit the frame rate, so make sure to consider using Nvidia’s deep learning super sampling too if it’s supported, to help keep frame rates high and smooth.

The onboard wireless support with the XPS 8940 is excellent too. It has a built-in Killer 2x2 network interface, giving full support for Wi-Fi 6 for maximum speed and the lowest latency, even on busy networks. It also has the option of a wired Gigabit Ethernet connection, if you prefer the stability and reliability of a wired networking solution.

Backing up those core components that deliver high performance is 32GB of fast memory. That’s more than any game needs, but with some of the latest ones demanding as much as 16GB, you can rest assured that no background tasks will take away from your game performance. It also gives you plenty if you like to do a lot of web browsing with many tabs open at once, or if you want to do some video editing when you’re not playing.

The terabyte of SSD storage gives you all the space you need for Windows and an expansive game library, making sure that the system boots fast and all your games load quickly. You don’t need to store all your photos and videos on that SSD, though, with a secondary 1TB hard drive giving you extra storage space, so your main drive can focus on games and any applications you want to be as responsive as possible. 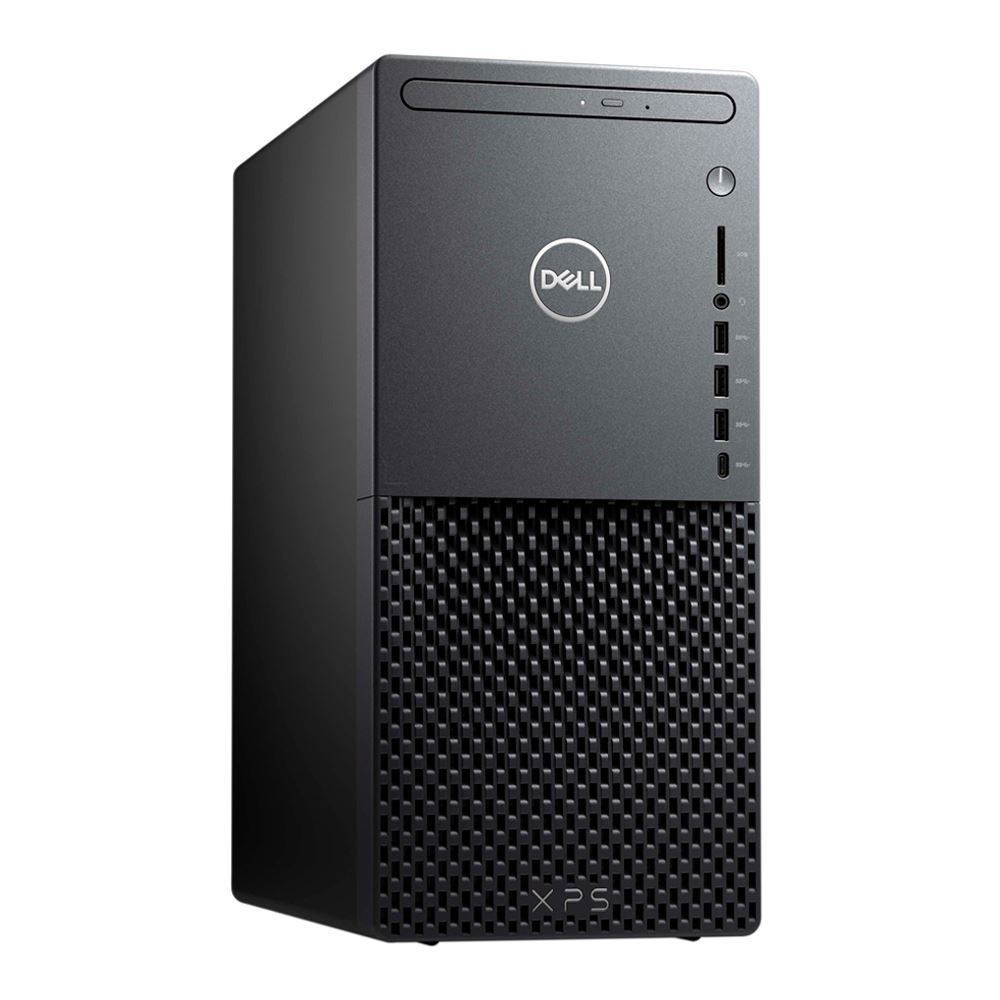 The XPS 8940 is a stealth gaming PC, with a high-airflow, but understated chassis that is surprisingly small considering all of the power inside. Its black paint job and sleek exterior bely its gaming prowess, helping it fit into a home office, or alongside other electronics you already have in your home. The small footprint also makes it easy to fit it under or on top of desks where space is at a premium, and it’s lightweight enough, at just 18lbs, that if you need to move it around – or even take it with you to a LAN party -- it’s no hassle at all.

That same chassis comes with a great selection of front-facing ports, giving you quick and easy access to several USB-A ports, a USB-C port, and a headphone jack. There’s also an SD card reader for quickly and easily downloading photos or other data from standalone devices.

Although the hardware inside this PC is perfect for all sorts of games, there’s no denying that as desktop gaming PCs age, they don’t perform as well. That’s no problem with this Dell gaming PC, as its interior is easily upgradeable. Pop the side panel off and even though this is a compact desktop, you’ll find you have easy access to the memory, graphics card, and storage. Replacing any and all of them is easy, so in the years to come, if you need a little more storage space, or graphical power, you can buy a single component and install it, either by yourself or with help from the Micro Center PC upgrade services!

To top it all off, the Dell XPS 8940 is a complete gaming package. It comes with a bundled gaming mouse and keyboard, so you don’t even need to buy any additional accessories (save perhaps, a monitor) to get playing straight away. It even comes with a free copy of Marvel’s Guardians of the Galaxy, thanks to the included Nvidia RTX 3060 Ti. You can redeem the code straight through Steam, and get playing as soon as it’s downloaded.

All of this would normally cost you over $2,000, but at the special Platinum Collection price of just 1,799.99, the Dell XPS 8490 is a fantastic buy for anyone looking to upgrade their gaming experience.