Virtually everybody uses a keyboard on a daily basis, be it the built-in set of keys on a laptop or a separate one that’s connected to a desktop PC. Many of us don’t pay that much thought to these ubiquitous peripherals, but if you’re finding that your cheap keyboard isn’t cutting it any longer and it’s time for an upgrade, we’re here to help.

In this guide, we lay out the differences between membrane and mechanical keyboards, compare the most common mechanical switch types, and bring you up to speed with everything else you need to know before you buy.

What is the difference between membrane and mechanical keyboards?

Keyboards are generally broken down into two broad categories: Membrane keyboards and mechanical keyboards. These terms refer to the way in which the keys interface with the keyboard’s circuit board, which reads your key presses and sends the inputs to your computer.

Membrane keyboards are more common today due to their simplicity and low cost of manufacturing. On a membrane keyboard, the keys sit on a rubber overlay – the namesake membrane – which then sits on the circuit board. When you press a key, it pushes on the membrane and registers a keystroke. 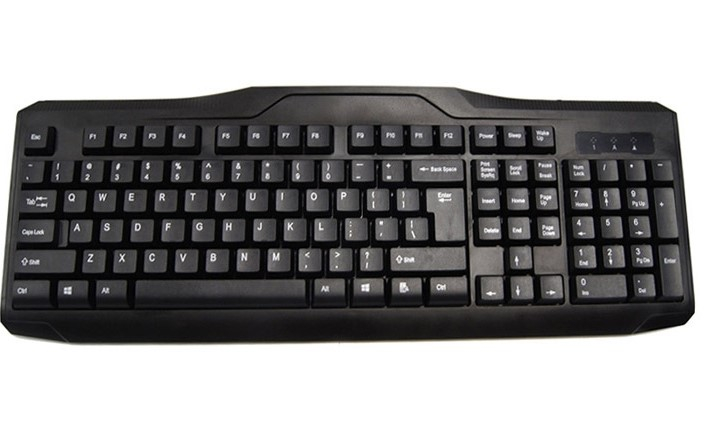 If you used computers in the ‘80s or ‘90s, for instance, then you’ve almost certainly typed on a mechanical keyboard before, maybe without even realizing it. Perhaps you actually remember how good those old keyboards felt (or how clicky, heavy, and noisy they could be) and wonder why keyboards today don’t feel quite the same. Now you know.

Mechanical keyboards are greatly preferred by people who do a lot of typing, such as writers, as well as gamers who demand more comfort and precision from their PC accessories than most users (I include myself among both groups). Thankfully, mechanical keyboard switches never completely disappeared, and the internet has allowed for something of a renaissance in mechanical keyboard design in recent years.

In fact, you’ve now got more choices than ever when shopping around for a mechanical keyboard – wired, wireless, full-size, compact, you name it – and that’s before you even start looking at the sprawling number of different keyboard makers, switch types, and switch manufacturers out there. Now that you’ve got the basics down, though, we can dive deeper down the rabbit hole of switch types and their characteristics. 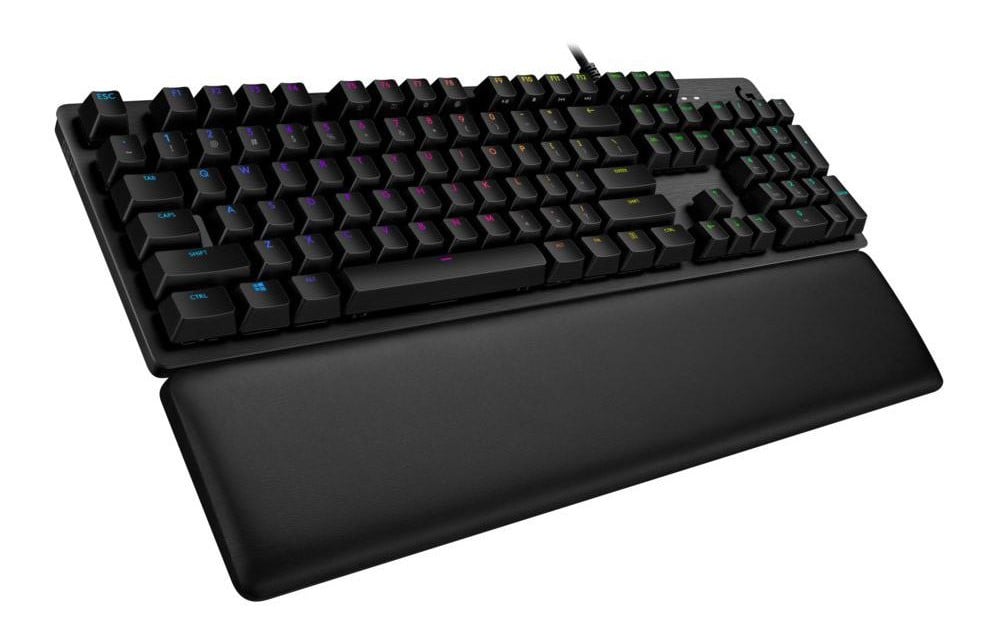 What is the difference between mechanical keyboard switches?

These non-Cherry MX keyboard switches are generally referred to as “Cherry clones,” which is not necessarily a term of derision as several of today’s off-brand switch makers are well regarded by mechanical keyboard users. Gateron, Kailh, and Outemu are three popular “Cherry clone” brands and you’ll often see these switches on competitively priced keyboards. Of these, Gateron is arguably the most highly rated, with many users claiming that these keyboard switches are even slightly smoother than Cherry MX in some cases.

Switches of this style, whether Cherry MX or clones, are categorized by colors which are typically equivalent between makers (e.g. a Gateron brown keyboard switch is roughly the same as a Cherry MX brown switch). There are quite a few to choose from today but the most common are red, brown, blue, and green, and those are the ones we recommend you stick with unless you are already familiar with mechanical keyboards and have more specific needs.

These colors designate the typing characteristics of a particular keyboard switch. These include actuation weight, or the amount of force needed to depress the switch enough to register a keystroke; tactile feedback, or whether the keypress is tactile or linear; and noise level, or whether the keys are relatively quiet or “clicky” and loud when pressed. “Tactile” and “linear” are terms you’ll see a lot when looking at mechanical keyboard switches, and refer to the physical sensation of each keypress. A tactile switch has a soft “bump” which you will feel when you press the key down to the actuation point (hence the switch’s “tactile” namesake). A linear keyboard switch is non-tactile, meaning that the keystroke will be totally smooth with no tactile bump.

The choice between tactile and linear keyboard switches boils down to preference. Both have their advantages: Gamers, for instance, might prefer a linear switch, as the smooth keystroke makes quick, successive key presses (such as double-taps) slightly faster. On the other hand, many typists enjoy the physical feedback of tactile switches. You may want to test out both if you get a chance to see which style you prefer before buying.

As far as the most common types go, Cherry MX red keyboard switches, such as those found on the Corsair K70, are linear, quiet switches with a medium actuation force of 45 centinewtons (cN). Cherry MX brown switch keyboards are similar, but these keys are tactile with an actuation force of 55cN. These are two are very popular and well-rounded switches for common typing tasks like writing and gaming, and they’re a good place to start if you’re new to mechanical keyboards. I personally use a Gateron brown switch keyboard for both writing and gaming and find that it fits this middle ground very well. 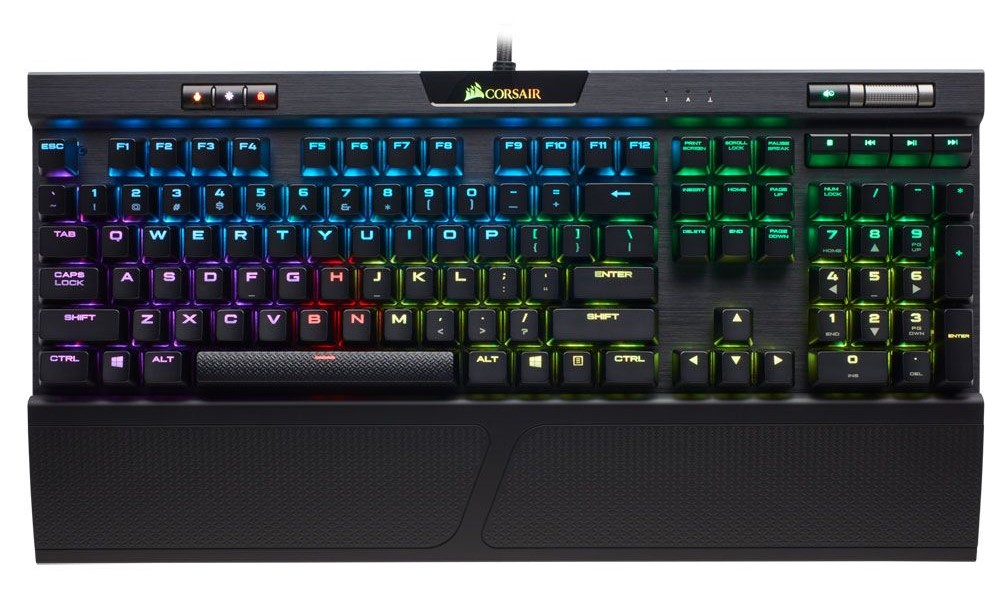 Cherry MX blue switch keyboards are both tactile and clicky, meaning that you will not only feel but also hear the tactile bump during each keystroke. These switches feature a heavier actuation force of 60cN as well. Cherry MX green switch keyboards (and clones from brands like Razer) are tactile, clicky, and even heavier still, with an 80cN actuation force – if you’ve never used green switches before or you have a light touch while typing, you might find your fingers actually feeling slightly sore after using these for awhile.

What are the noise levels of various switches?

Mechanical keyboard switches are generally noisier than their non-mechanical counterparts, but there are audible differences between switch types. Aside from terms like “tactile” and “linear,” you’ll see switches described as “clicky” and “non-clicky.” These admittedly aren’t the most technical terms, but they’re fairly straightforward in that they refer to the noise output of each keystroke.

Red and brown switch keyboards are non-clicky, and so are a bit quieter than blue and green switch keyboards (red being the quietest mechanical keyboard switches of these four popular switch types due to their linear, non-tactile operation). People immediately around you will hear you typing, and you will hear yourself typing, but not to the point of being disruptive.

Clicky blue and green switch keyboards, on the other hand, are somewhat notorious for the amount of noise they create. This makes them less than ideal for office environments, which might be a problem for some as these switches are often favored by those who do a lot of writing, data entry, and other precise typing-heavy tasks. This is something to bear in mind if you’re going to be using your mechanical keyboard in a shared environment.