When shopping for a desktop computer, there are a lot of decisions to make. Do you go Mac or PC? Do you want a tower and monitor or a sleek all-in-one? There are many factors to consider when deciding which desktop to purchase.

We’re delighted to bring you this 2022 buying guide so that you can purchase your next desktop with confidence! 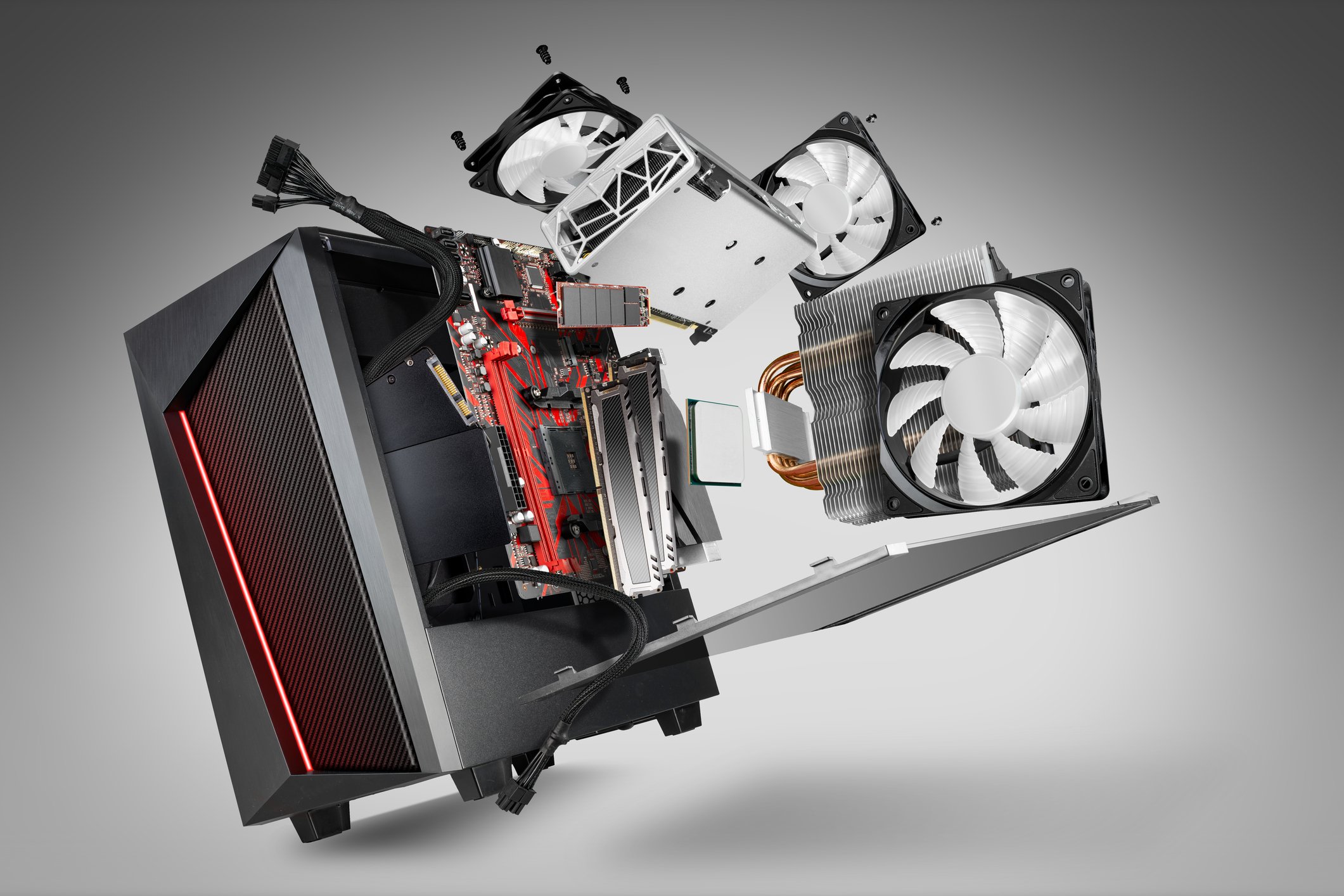 While laptops and tablets have grown in popularity, desktops are still the preferred choice for many users. Here are some advantages of desktops:

Desktops can be upgraded in many ways. You can add memory and change your storage drive for more space if you need to. You can also add additional components like video graphics cards for gaming. In short, you can customize a desktop far more than a laptop or tablet.

As a rule of thumb, you get more computing power for every dollar you spend on a desktop compared to a laptop.

Gauging the Usage Level of Your Desktop

As you begin browsing for a new desktop computer, it’s important to consider what the intended use of your desktop will be. By knowing your intended use, you can gauge what level of power, storage, and additional components you may need. Let’s take a look at a few usage categories that buyers find helpful:

At higher usage levels, faster processors, more system memory, and larger, faster storage will be needed in your new desktop. 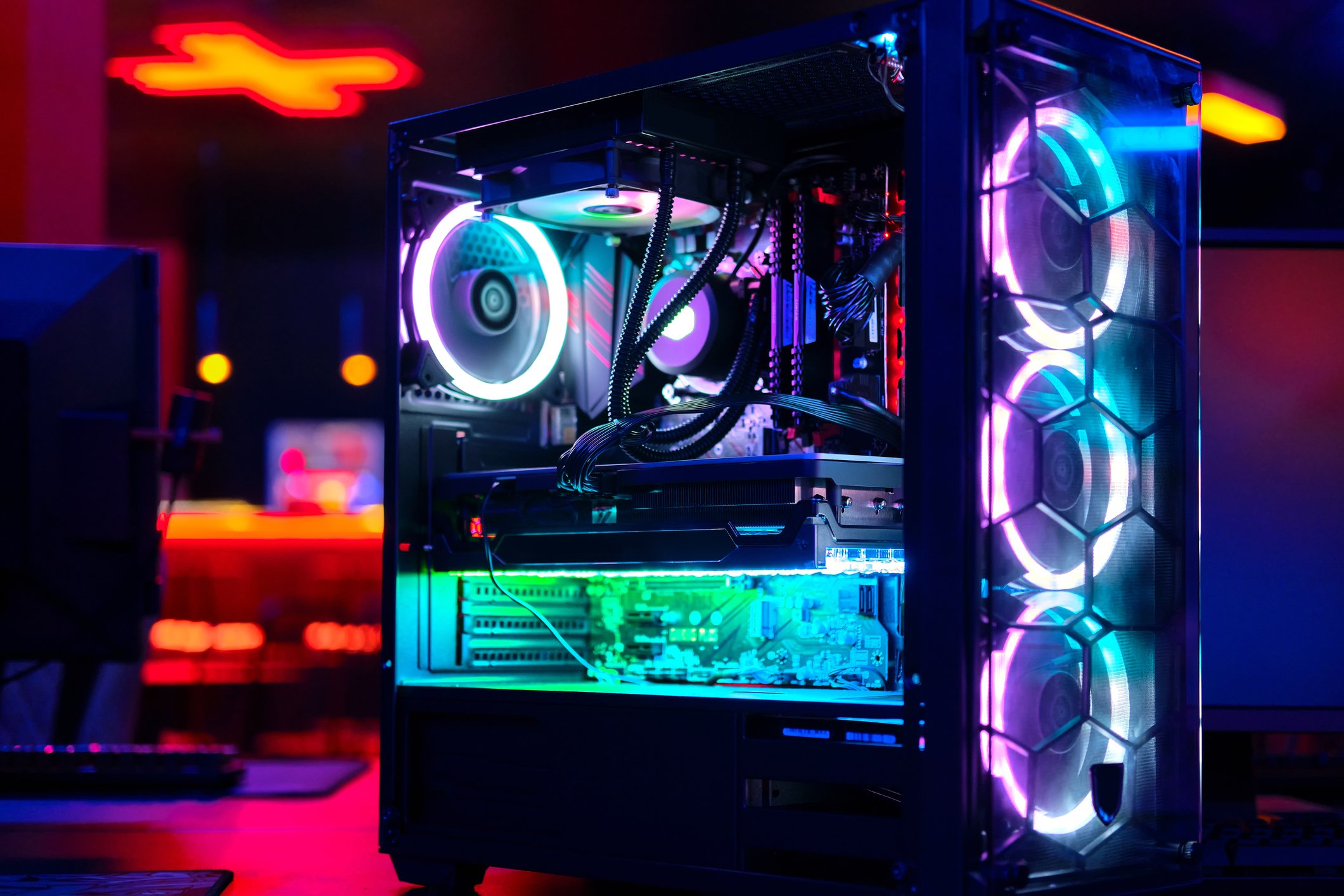 The Key Components of Desktop Computers

Most desktop buyers choose between one of the following operating systems:

macOS is only available on Mac computers. The macOS interface is simple and easy to use without a lot of clutter, making it the go-to for those new to the computer world and those who just love the easy-to-use features. macOS also comes pre-loaded with a number of Apple programs and tools that fans of the OS adore.

Windows PCs are the most common type of PC on the market and where you’ll find most of your high-powered gaming PCs. Windows 11 is the most recent edition of the Windows OS and offers a huge amount of customizability and a vast online support system, including downloadable tools and just about any app you can think of.

The power of your desktop’s processer—in combination with its memory—determines how many programs you can run at one time at a reasonable speed and how complex they can be.

Most desktops have an Intel® or AMD processor:

·        Core i9: These processors contain unlocked cores and multiple threads that can take on the most demanding games and projects.

·        Core i7: Many gamers, graphics designers, photographers and videographers opt for this processor. It’s great for multitasking and multimedia creation.

·        Core i5: This processor is generally considered the minimum for gaming and can handle decently intensive multitasking.

·        Core i3: These entry-level processors are great for simple email usage, internet browsing, and basic tasks done in programs such as Microsoft Word.

For users with an economy-sized budget, you may see Intel’s Pentium® and Celeron® processors in the most-affordable desktops. These processors are sufficient for email and basic internet browsing, but their ability to multitask is somewhat limited.

On the opposite end of the spectrum, some workstation desktops have Intel Xeon® processors. These are multicore superprocessors designed for network servers and other complex programs.

AMD’s architecture is designed with gamers and content creators in mind. AMD’s Ryzen™ 5000 Series desktop processors are a great fit for gamers and artists. 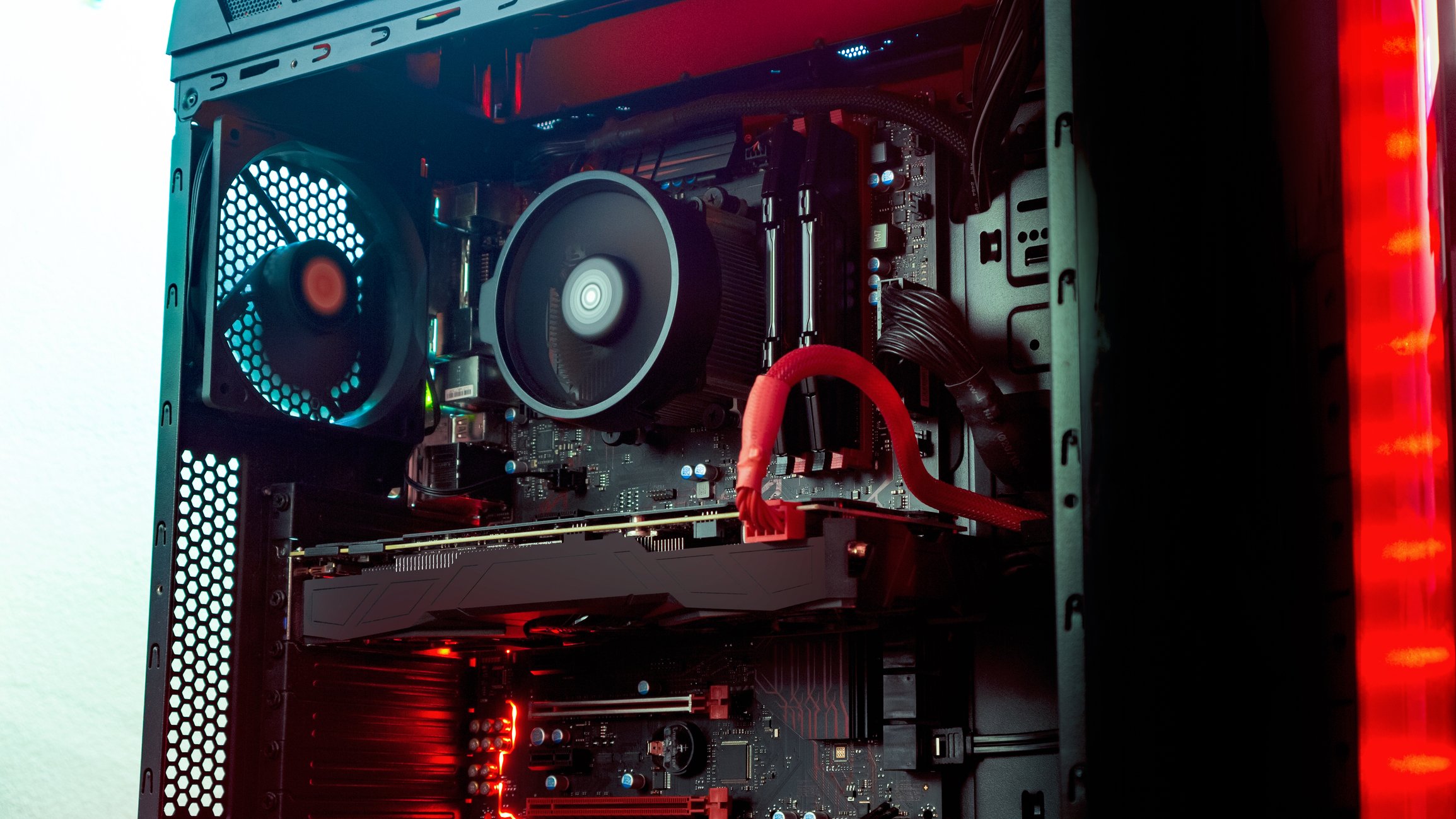 If you’re focused on gaming or intense graphic work, you may want to consider choosing a desktop with a graphics card with dedicated video memory. Dedicated video memory for your graphics reduces the burden placed on your CPU and gives you faster performance. A must-have for intensive video editing and gaming.

RAM stands for random access memory (often simply called “memory”). Your desktop’s memory assists your processor in running multiple programs at the same time. While your computer could theoretically run on 4GB of RAM, most desktops come with 8GB to 16GB. 16GB handles multitasking for video editing and gaming. It’s important to keep in mind that if you think you will need more memory down the road, you should look for a desktop that lets you add more RAM.

Let’s take a look at the different types of internal storage:

Hard disk drives are economical as they provide plenty of capacity for smaller budgets. HDDs tend to produce heat and noise, and their speed is limited by how fast their parts operate. Most desktop HDDs have 7200 rpm spindle speed, although some models only have 5400 rpm.

Increasingly some desktop towers and all-in-one desktops have two storage drives--a hard drive and a solid-state drive. This dual-prong approach gives you increased speed and plenty of storage capacity.

When it comes to storage size, there are many options to choose from. It’s important to assess what you will be using your desktop for in order to determine how much storage space you will need. If the files, images, and videos you’ll be storing on your desktop are larger in size, you will likely need a larger hard drive to ensure you have enough space.

Here are some storage size examples to provide context:

There are several different types of desktops. Selecting the right desktop depends on what your intended use for it is. Let’s take a closer look at four of the most common types of desktops: 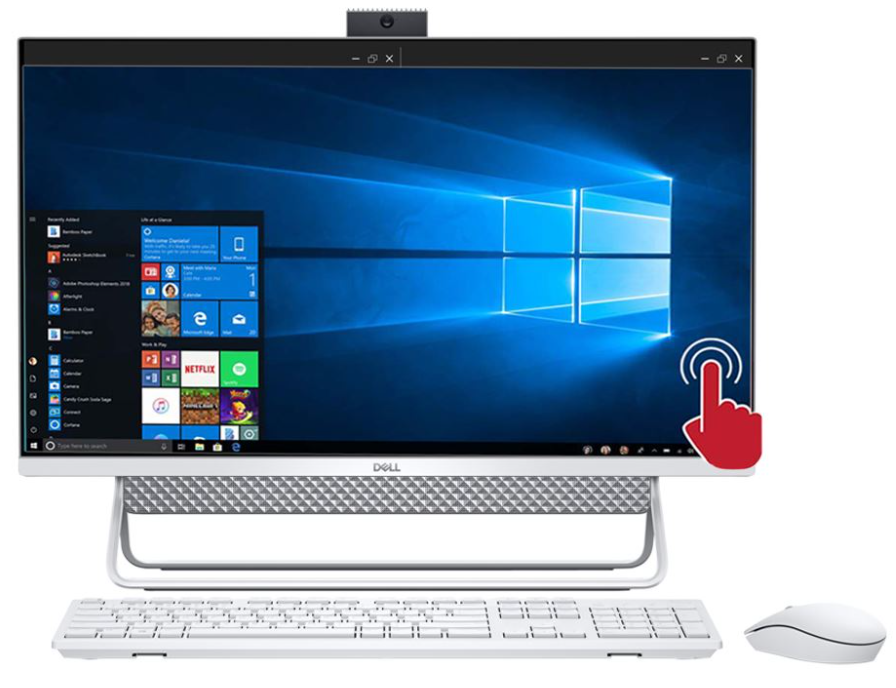 AIOs are handy alternatives to traditional towers and monitors. They are compact systems that combine the monitor and PC into one unit. For example, AIOs with large screens are fantastic for keeping all of your spreadsheets up at once so that you can see that all the numbers are calculated correctly. Plus, AIOs can offer touch screen options that are intuitive and make navigation easy. 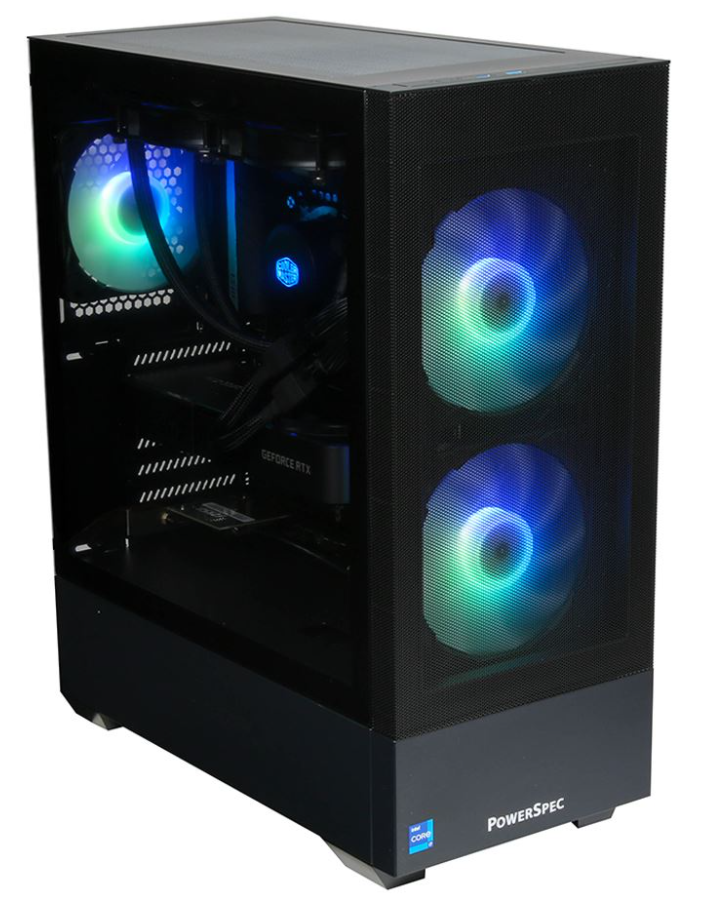 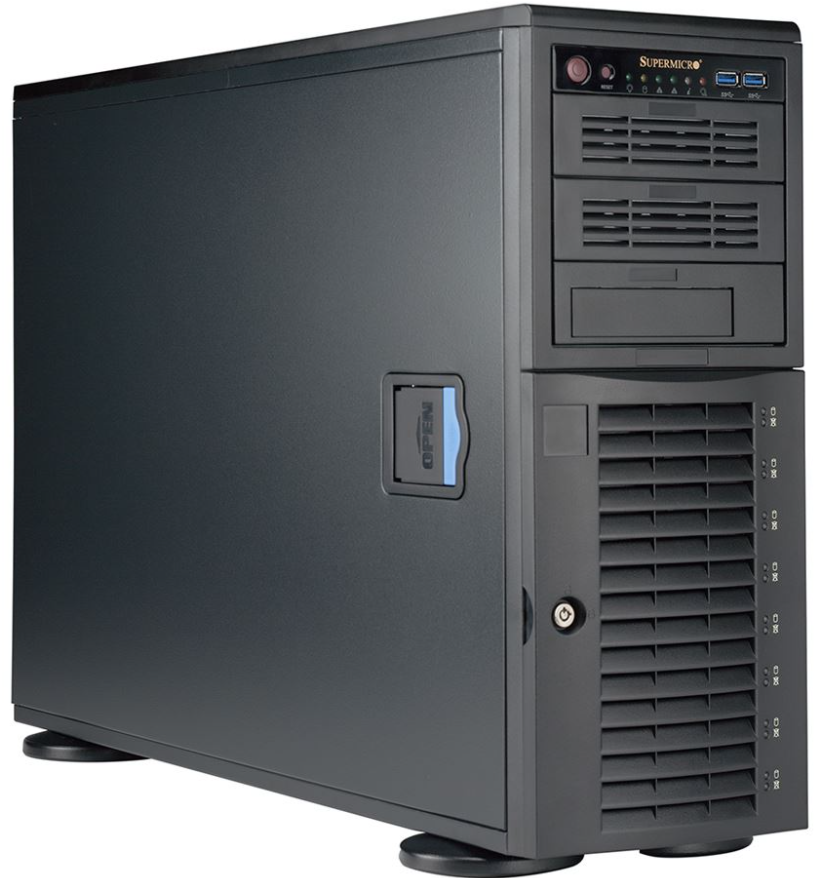 Workstation desktops are some of the most powerful desktops available. These desktops are often used for professional photography, video editing, scientific analysis, computer-aided design (CAD), and many other complex applications.

Workstation desktops are available for budgets ranging from the cost of a standard desktop to tens of thousands of dollars. If you need to use highly complex software with the most reliability available, you should consider a workstation desktop. 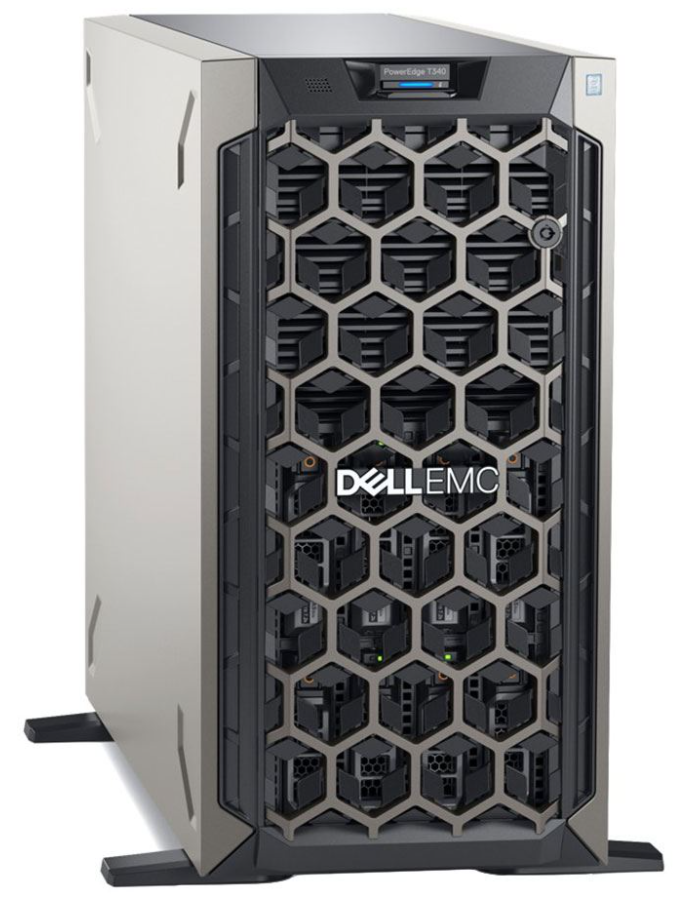 Desktop servers are a great option for small businesses. As a business owner, a desktop server gives you complete control over the data and software you use to run your business. With a desktop server, you don’t have to rely on a third party to host your data.

Desktop servers are robust enough to work under large loads and can handle a large number of users. Desktop servers can also be expandable, which means you can upgrade them as your business grows.

Looking for more computer buying guides? We’ve got a full section dedicated to reviews and buying guides as well as The Ultimate Guide to Buying a Gaming Laptop, How to Choose Parts for you Custom PC Build, The Best Laptops for Under $1000, and Should You Build or Buy a PC in 2022? And if you can’t find what you’re looking for, don’t hesitate to post a new discussion and the Community will be happy to help!