Trying to upgrade my gaming rig

keeboardnmouse ✭
March 2 edited March 2 in Help Choosing Parts
Hello everyone,
I am wondering if you could give me some suggestions on what to upgrade/add to my gaming pc first.
I am getting near-60 fps on most non-GPU-intensive games, and for a GPU-intensive games, I am getting 40-50 fps.
I would rather upgrade to improve my frames and to be able to stream games rather than make videos.
Also every game goes to sub-30 FPS when I try to stream.
My current build is https://www.microcenter.com/site/content/custom-pc-builder.aspx?load=0b2394dd-cd3d-4132-aca3-8b9577ce2932
Could you help suggest any first upgrades to go for?
0 · Share on FacebookShare on Twitter 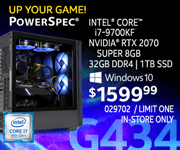