What to Know When Building Your First PC

Building a PC can be a time-consuming endeavor even for experienced techies, but your first time is particularly intimidating. Don’t let it be: Building a computer is a fun, rewarding, and immensely satisfying experience, and you’ll learn a lot in the process, too.

Nonetheless, it’s not as easy as putting Lego sets together (despite what some PC builders may claim). There’s a lot to keep in mind and it’s easy to fall down endless rabbit holes doing research online, but we can simplify things a bit with this first PC build guide for those who haven’t done this before. 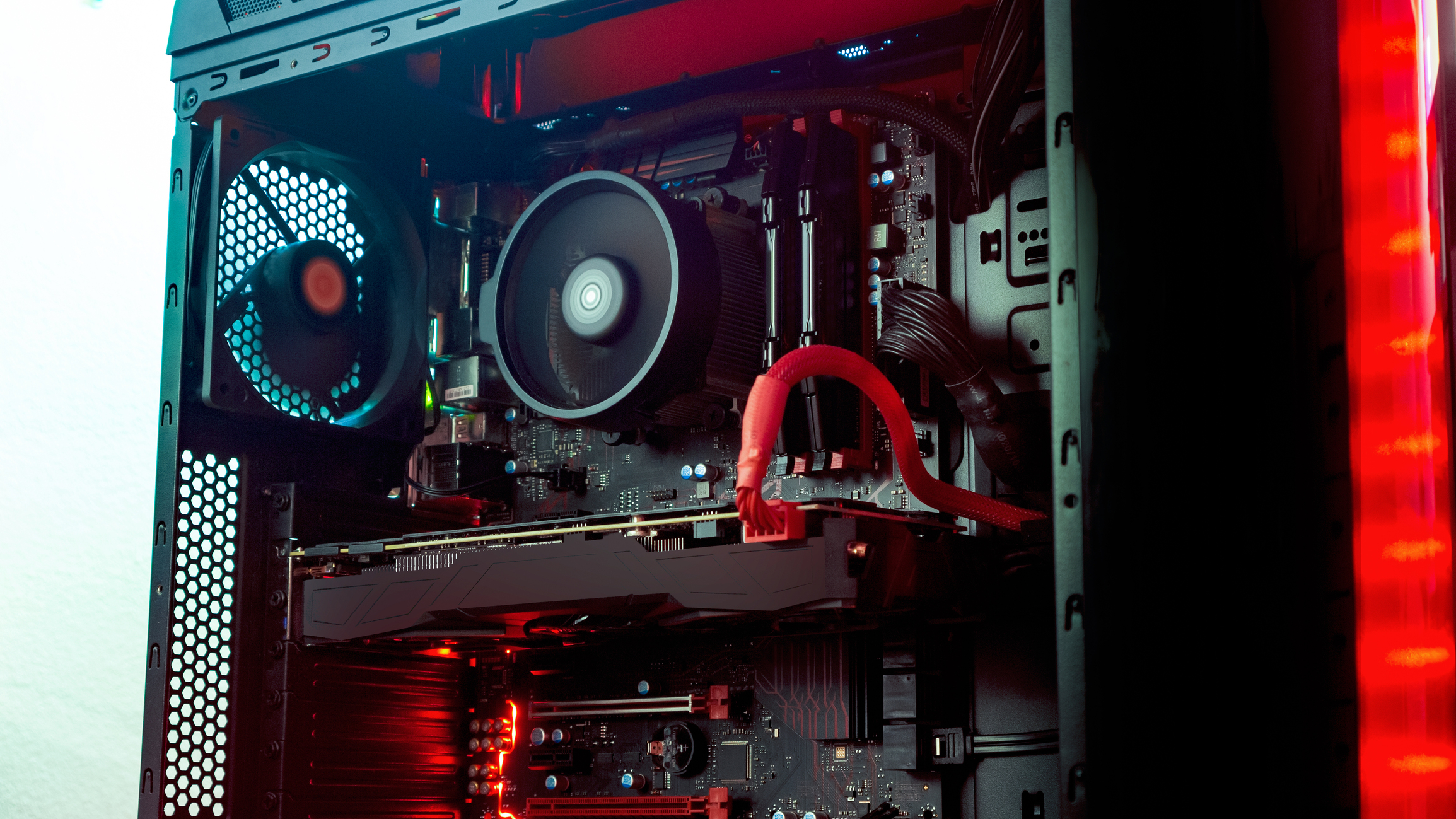 What should I know before building a PC?

First, you should familiarize yourself with the basics of PC building. Namely, the components, what they do, and how they fit together. This sounds fairly simple, but there is a dizzying array of technical specs, compatibility factors, and other considerations to be aware of.

While it’s easy to get overwhelmed at the start of your first PC build, the fundamentals are pretty straightforward. There are seven main components of a build: The case, motherboard, power supply, processor, memory, cooling, and storage. If you’re building a gaming PC, you’ll be adding an eighth component: a graphics card.

The case, motherboard, and power supply form the basic supporting structure of your build. The case contains all the components, the motherboard provides the sockets and ports for said components, and the power supply delivers electricity to everything while regulating output to ensure everything operates safely.

Then come the CPU, GPU, and RAM, which perform the actual “computing” that your PC is going to do. The CPU and GPU are the most expensive parts of the build, which makes sense as they could be considered the heart and brain of your computer – or two brains, more accurately. Finally, you’ve got your cooling (most likely case fans) and storage.

Compatibility between parts is key, but we’ll get into the particulars of choosing specific components next. These are just the most basic things you need to know before starting your build.

How do I choose the best PC parts?

Your computer’s case is as straightforward as it seems: It’s the housing that contains all the hardware. Simple as it is, some of the terminology can get confusing. Let’s keep things easy: For a first-time PC build, stick with an ATX mid-tower or microATX mini case, with the mid-tower being our stronger recommendation.

These case sizes offer wide compatibility with most PC components while providing ample space to work in. Cable management is also important; while it doesn’t have a major effect on thermal performance, proper cable organization makes the final build look a lot cleaner and makes things like future upgrades less of a headache. Cosmetic features such as see-through panels are purely optional.

For a first computer build, the Corsair iCUE 220T RGB case in white or black is a great ATX mid-tower, but you’ll be well-served by any ATX mid-tower so long as it comes from a good brand. If you want something smaller, the Cooler Master MasterBox Q300L is a solid microATX mini tower with room for full-sized GPUs.

The central processing unit, or CPU, is your computer’s brain. For a first PC build, stick with an Intel Core i3 or i5 CPU (11th or 12th generation – 10th gen Core CPUs are a bit long in the tooth by today’s standards) or a third-gen AMD Ryzen 3 or 5 CPU. Core i5 and Ryzen 5 is easily the price/performance sweet spot.

The motherboard provides the basic structure for all the electronic components – processor, graphics card, RAM, storage, fans, etc. – and connects them together. Common advice is to go with the cheapest motherboard that is compatible with your chosen parts, but we don’t think that’s ideal. Better motherboards are typically built stronger and offer improved longevity and superior thermal performance, so you don’t necessarily want to go with the cheapest, most bare-bones one that fits your build.

The rule of thumb for choosing a power supply is that you want twice the wattage that your system will consume. We recommend around 650 watts and a power efficiency rating of 80+ Bronze or higher. This is the sweet spot in price-to-performance and is a good pick for a first-time computer builder.

You have the choice between a modular, semi-modular, and non-modular power supply. PSUs come with multiple input cables for powering the system, and you’ll use whichever one your motherboard requires. Modular and semi-modular PSUs allow you to remove unused cables, freeing up space and allowing for easier cable management. Non-modular power supplies have permanently attached cables. Modular PSUs are nice but not mandatory, especially if your PC case has a “basement” where you can stuff unused cables. 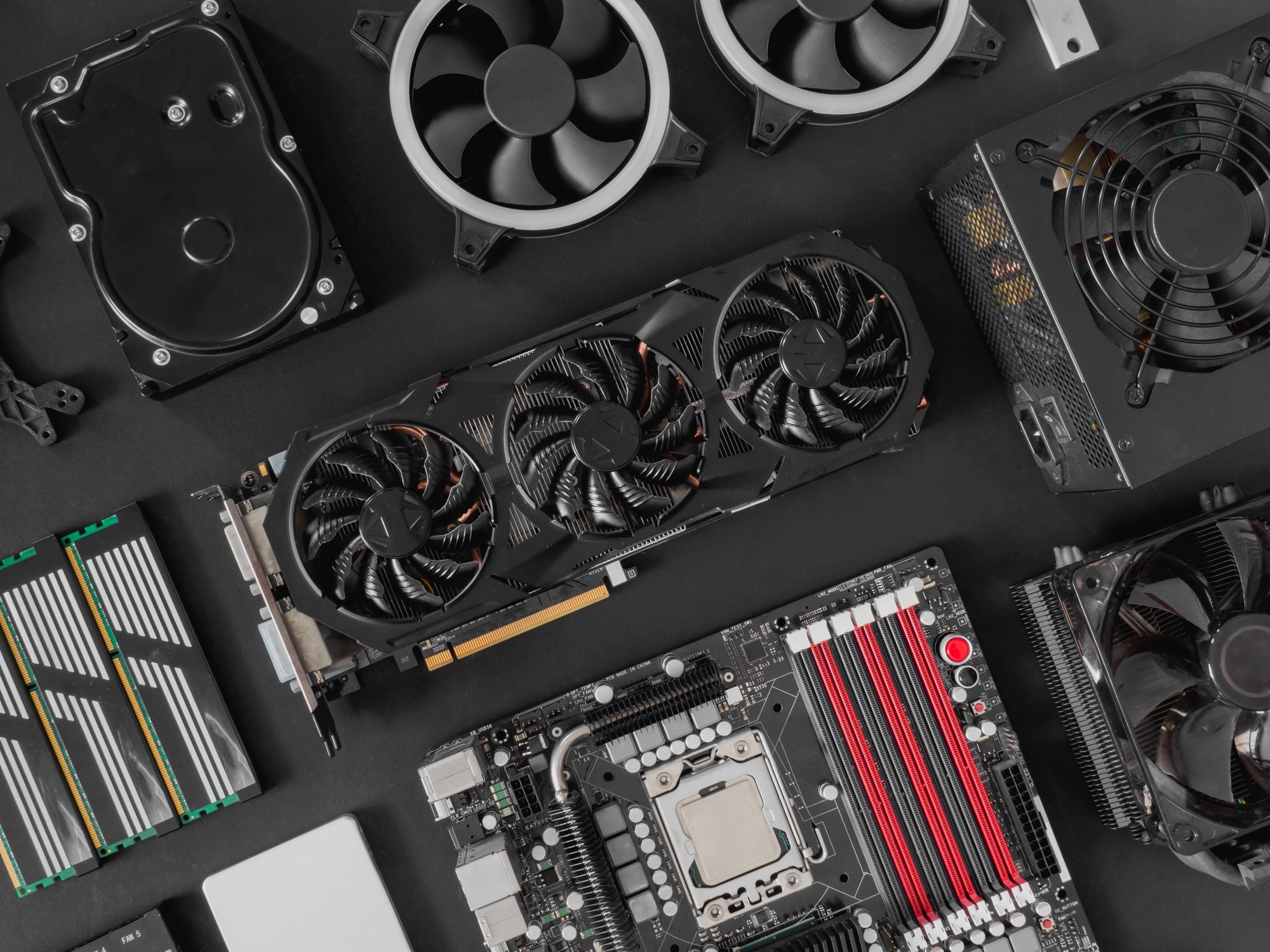 Graphics cards are synonymous with gaming PCs, but they’re also incredibly important in average use builds as well, especially if you plan on doing any photo editing, video editing, or digital art. For a first-time PC build, though, you shouldn’t go overboard. While single-fan cards may be tempting, as they do run a bit cheaper, we do recommend springing for the dual-fan cards, as they offer better thermal performance and longevity.

Any of the current-gen GPUs will be able to handle the latest games at 1080p with good settings. The Nvidia GeForce GTX 16-series cards are a great value, as are the AMD Radeon RX series GPUs – although, again, we generally favor the dual-fan versions.

RAM, or random access memory, helps your computer run programs and multi-task. Think of it as your PC’s short-term memory, where it stores (or “remembers”) tasks for quick access. We suggest a minimum of 8GB, but 16GB is better. We also recommend clock speeds – yes, RAM has those – of 3200Mhz or higher, but you can be flexible here if this isn’t a gaming PC.

If going with 16GB of RAM or more, get two sticks. This gives you a dual-channel memory setup (two 8GB sticks will perform slightly better than a single 16GB stick). Thankfully, RAM isn’t particularly expensive. You can grab the Crucial Ballistix Gaming DDR4-3200 RAM or G.Skill Ripjaws V DDR4-3200 RAM dual-channel 16GB kits for around $70.

Cooling is pretty straightforward. Some CPUs come with fans and will work fine for a first time build. But double check that your CPU has a fan – you may need to pick up an aftermarket cooler. An entry-level PC won’t need anything too crazy, something like the Thermaltake UX100 would work great. Your GPU, if you have one, has built-in fans. That means all you need to worry about is case fans, and many cases come with at least a couple of fans already. These are usually fine as well. If you feel the need to add more, just buy ones that fit! Most cases use 120mm or 140mm fans, although some use both.

Unless you want to go all-in, a water/all-in-one cooling system isn’t necessary for your first PC build. A good fan setup is more than sufficient. Make sure your motherboard has enough fan headers (power inputs) for however many fans you plan to use; otherwise, you’ll have to buy fan header splitters which is an extra expense and adds cable clutter.

For your system drive, there’s little reason not to stick with an SSD today. They’re faster, simpler, and more reliable than the platter-based drives of old (thanks to the lack of moving parts on SSDs); 512GB is the minimum, but 1TB is better, especially if you’re going to be dealing with lots of large files or programs like videos or games. However, a 7,200rpm HDD is fine as a backup; for instance, you could pair a 256GB solid-state system drive with a 2TB HDD for static file storage. Storage needs are unique to each individual, so this is really your call – but a 512GB SSD is a good place to start if you don’t have specific requirements here.

What are common concerns and roadblocks when building a PC?

The biggest pitfall with any first PC build is parts incompatibility. The last thing you want is to drop a load of cash on your components and start putting them together only to realize that one or more of them won’t fit on your motherboard or inside your case, or that this or that part doesn’t have a certain feature that you thought it did. One common example is the aforementioned fan header count with motherboards. Thankfully, Micro Center’s PC builder ensures that all your components are compatible as you build.

The other big danger is that of parts breakage during assembly. Our advice to new builders: take it slow. Building a PC is a journey, not a race, so take your time and handle everything with care. It also helps to have a rough build plan ahead of time regarding the sequence in which you’re going to install everything. You might want to install the CPU and fan onto your motherboard before seating the motherboard inside your case, for instance.

Another threat is static electricity. Your body can generate it and if it discharges, there is a potential for damage to electronic components. This is unlikely, but it’s also easily avoided by installing the PSU and plugging it in (but keeping it turned off) while you build. This will keep the case grounded while you install the parts. You can also touch a metal part of the case once in a while to make sure you’re also grounded and not generating static. It should go without saying that building your PC directly on carpet is ill-advised. Antistatic bands can also help protect against shocks. 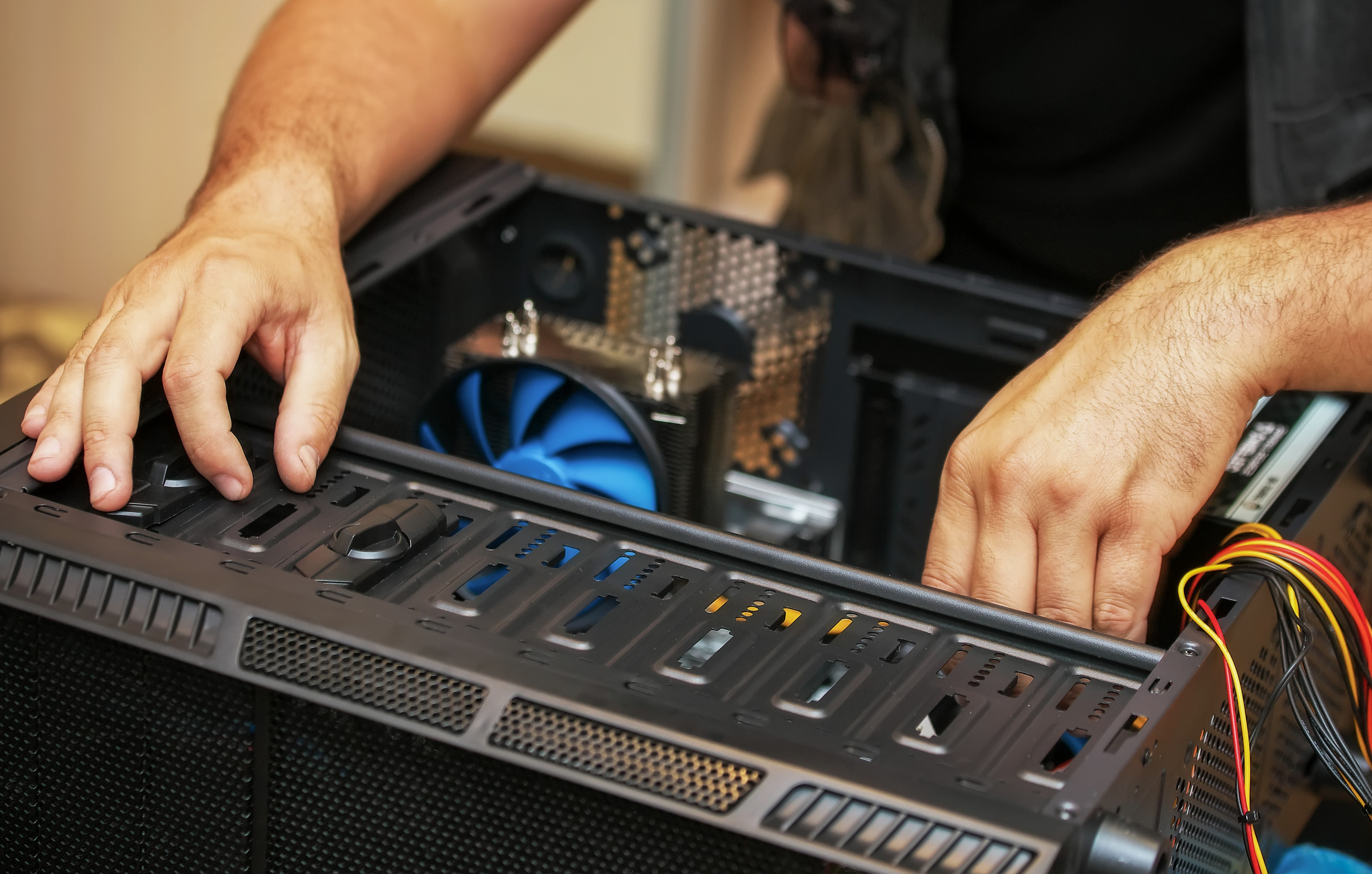 And that's the big things you need to know before you div into the wonderful world of PC building! If you have any other questions, the Micro Center BYO associates will be more than happy to help you pick out your PC parts, and Micro Center can even put your new build together for you!