As semiconductor technology has evolved in keeping with Moore’s Law and ever-increasing user demands, so too has the need for efficient cooling solutions. And, depending on your build, traditional cooling methods might not be enough to keep things running comfortably. One side effect of CPUs growing more powerful is that they require – and create – a lot more energy. In practical terms, this means heat and lots of it, which presents a serious challenge for both casual PC builders and overclockers looking to squeeze the most performance out of their hardware.

Mitigating heat isn’t just about keeping your gaming battlestation cool. Excess heat causes wear and tear on your computer’s components, which reduces lifespan and can result in premature hardware failures, crashes, or simply reduced performance – all things we want to avoid. That’s why a good cooling system like the IceGiant ProSiphon Elite is a wise investment. Not only will it keep your computer running cool under loads, but it can also extend the life expectancy of your build by reducing parts wear.

We’ve spent some time with this unique CPU cooler and have given it a thorough trial, so if you’re looking to putting together a new PC or upgrade your existing setup’s cooling setup, here’s what we found out about the IceGiant ProSiphon Elite and why you should definitely consider it for your build. 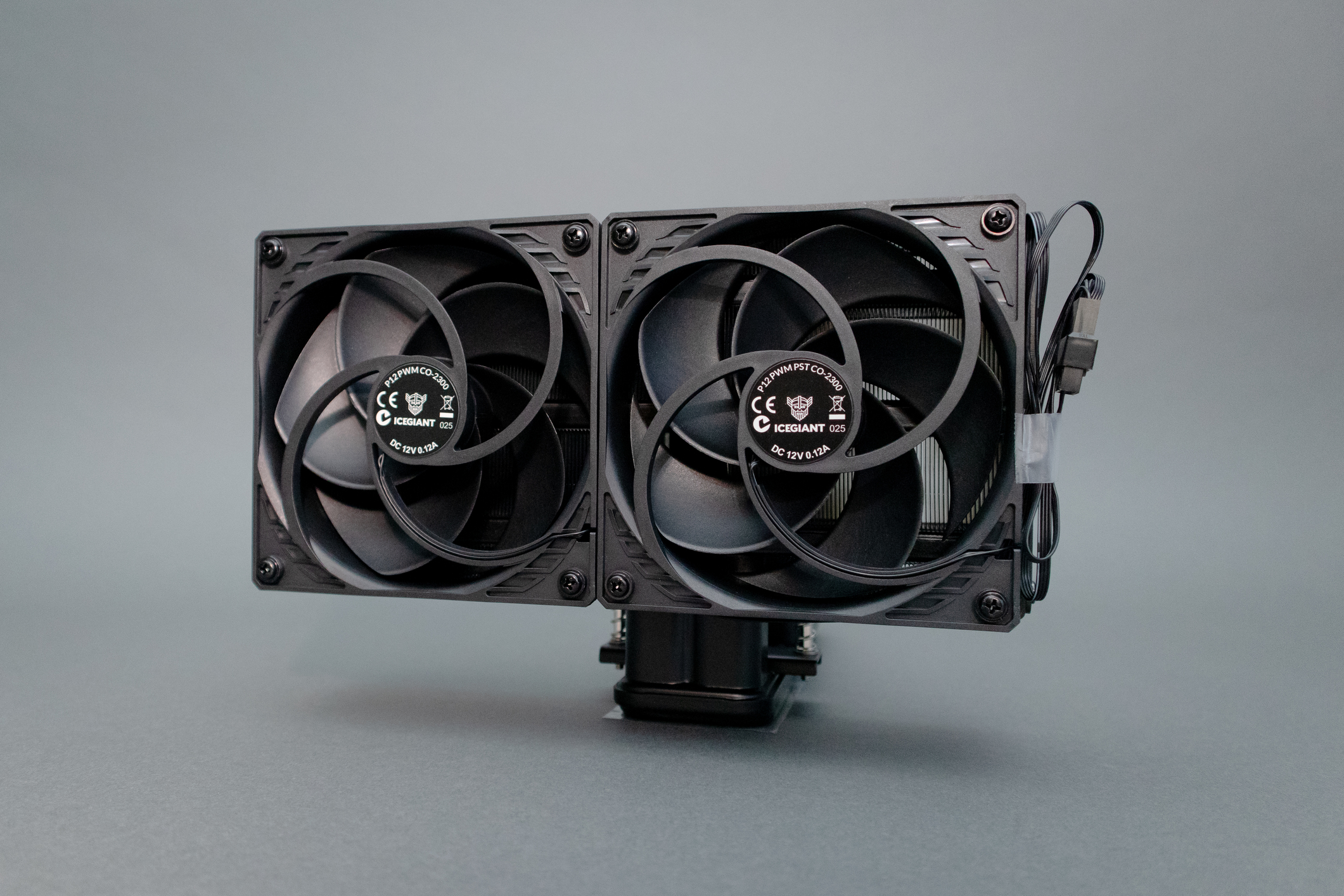 What is the IceGiant ProSiphon Elite CPU cooler, and how is it different from standard CPU coolers?

When it comes to higher-end CPU cooling solutions, PC builders have traditionally had two designs to choose from: A heat sink/heat pipe system, which pulls heat from the CPU via water vapor to be carried away and ultimately outside the case via air, or liquid cooling (also known as all-in-one, or AIO, coolers), which circulates fluid by pump to pull heat away from components to a radiator in a closed loop.

Both heat pipes and all-in-one water cooling systems have their advantages and disadvantages. Heat pipes are simpler and more economical but less efficient and noisier than liquid cooling. Water cooling is quiet and delivers extra thermal efficiency for high-powered systems, but is typically quite costly and complicated – not to mention that in the event of a water leak, your system can be ruined.

The IceGiant ProSiphon Elite cooler combines features and advantages of both standard heat pipes and water cooling while mitigating their drawbacks. Instead of a basic heat pipe or complex liquid cooling setup, the ProSiphon Elite utilizes IceGiant’s “thermosiphon” technology. This is a simple and elegant cooling solution that works in two phases: The heat from the CPU boils liquid inside the cooler. Vapor is then pushed to a condenser, where a large radiator cools the vapor back into liquid. Two to four 120mm fans then carry the heat away.

The result? IceGiant’s thermosiphon technology, which was initially developed for use for industrial applications (think massive data centers and machinery), delivers similar results to liquid cooling systems with the simplicity of heat pipes air coolers. The basic design works much like standard air coolers in that there are no moving parts inside the cooler body. The cooling liquid in the ProSiphon Elite moves via simple gravity, not a mechanical pump.

The IceGiant ProSiphon Elite cooler is optimized for multi-die processors such as AMD Threadripper CPUs, but is also compatible with AMD AM4, TR4, and sTRX4 socket CPUs as well as Intel 115x, 1200, 2011/2066, and 1366 sockets. Mounting hardware is included for all of these so you don’t have to worry about having everything you need to install it right out of the box. Also included are four 120mm fans; only two are required for operation, but you have the option of installing the other two if desired (which we recommend if your PC case has the space for it). 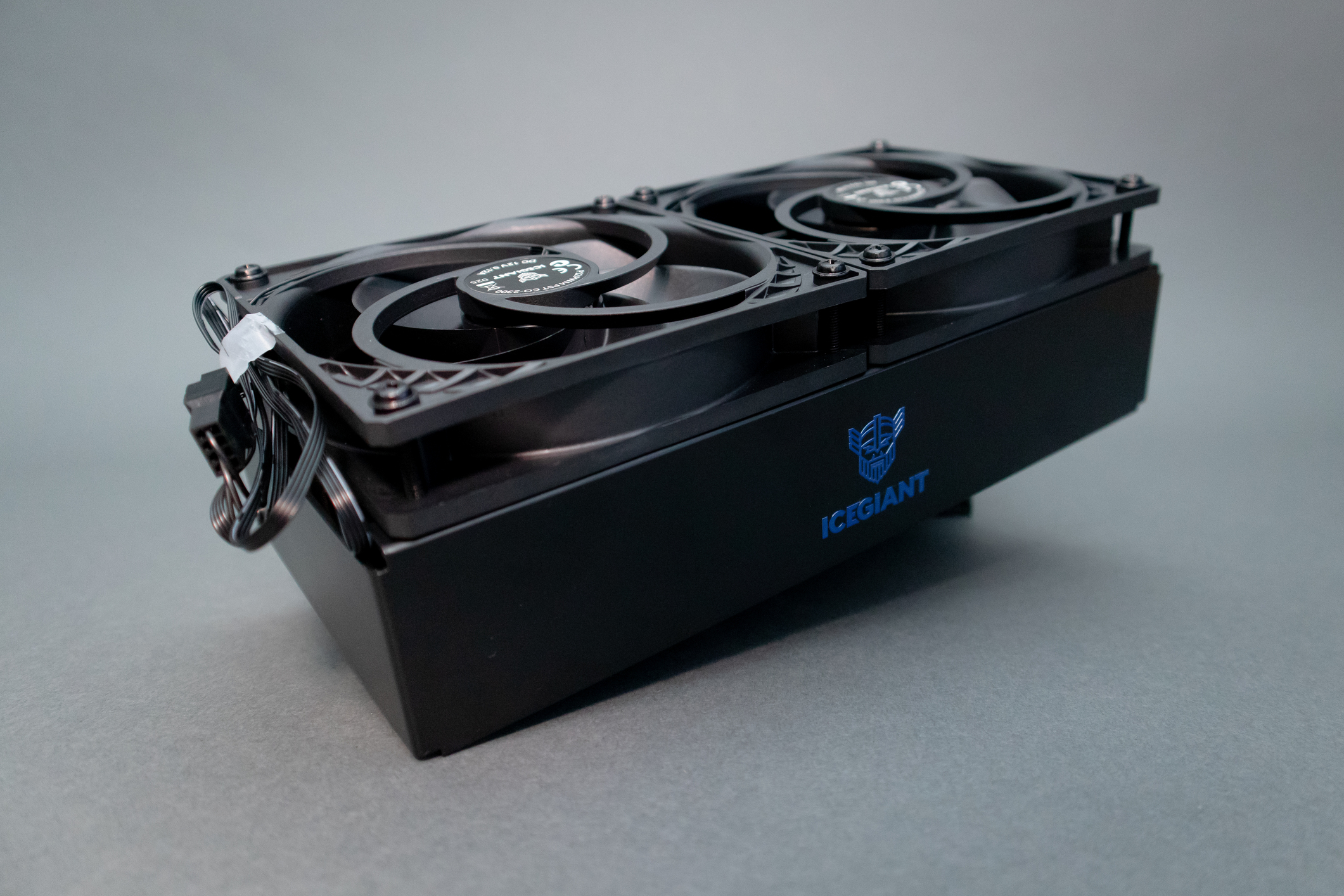 What are the advantages of the IceGiant ProSiphon Elite CPU Cooler?

You’ve probably already gleaned from the above description of the thermosiphon technology that the IceGiant ProSiphon Elite is a pretty simple (and reliable) design. No internal moving parts or mechanical pumps inside the 100% brazed aluminum housing means a dramatically reduced chance of parts failure and a greatly extended lifespan. To back this up, IceGiant offers a 10-year warranty with every ProSiphone Elite CPU cooler, which also covers the four included 120mm fans.

Also worth noting is that the thermosiphon uses tech-safe dielectric fluid instead of water. That eliminates the possibility of a catastrophic leak taking out your hardware. In fact, your PC’s components could be bathed in this dielectric refrigerant and remain unharmed. Given that the liquid is completely contained within the ProSiphon’s aluminum housing, however, the possibility of a leak is almost negligible.

Another advantage of the IceGiant ProSiphon Elite cooler (and arguably the biggest advantage aside from its impressive cooling capabilities) is its price. With an MSRP of $170, the ProSiphon Elite falls at around the same price or even cheaper than many name-brand AIO liquid cooling systems, delivering comparable thermal capabilities with much simpler operation and far less risk of catastrophic failure.

For the first Threadripper 3990X trial, we recorded temperatures while running the Blender 3D design software to see how the cooler performed under a demanding workload. In its stock configuration, we monitored the 3990X for 45 minutes under load. Throughout the test, CPU core voltage ranged between 0.775 and1.394V. The mean die temperature reached a maximum of 76.1 degrees Celsius during a brief spike, with the average highs floating around 68 to 69°C. The typical range was around 58 to 61°C, with the mean temperature sitting at 60.9 at the conclusion of the test.

We wanted to push things a bit further for the second test. With Precision Boost Overdrive automatic overclocking activated, we ran the Threadripper 3990X under load for a full hour, monitoring temperatures along the way. This time, core voltage went as low as 1.112V and topped out at 1.431V. Temperatures fluctuated a bit more here: The mean die temperature topped out at 94.9°C with a typical working range of mid-60s to low 90s. At the 45-minute mark (which is where we concluded the stock 3990X test), the mean die temperature was 93.4°C; at the end of the test, it was sitting at 66°C.

We also included the Ryzen 9 5950X in our trials as it’s a more realistic option for most PC builders given the current price of the Threadripper CPUs. We tested the ProSiphon Elite cooler with both single- and multi-core workloads. For the first test, we loaded a single core for 40 minutes. CPU core voltage ranged from 0.912 to 1.456V and the CPU die temperature never exceeded 68.6°C, with a typical working range of 59 to 64°C. At the conclusion of the stress test, the temperature was 54.4°C. 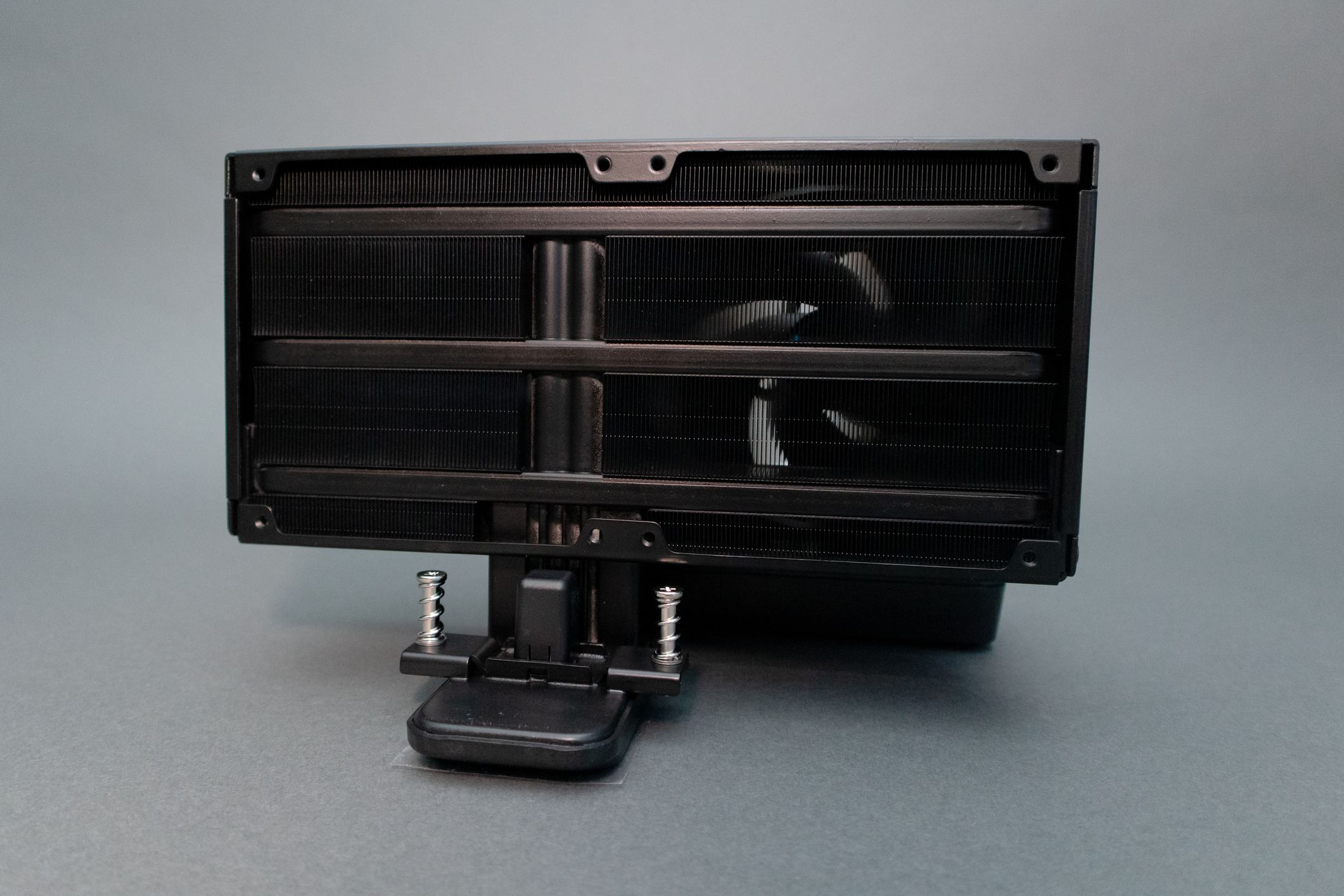 All in all, we found the IceGiant ProSiphon Elite CPU cooler to perform admirably across all of our stress tests. The Threadripper 3990X, being a 64-bit processor, naturally gave the ProSiphon Elite the most rigorous trial, but even during heat spikes, the temperature never exceeded the maximum safe operating level and averaged comfortably below that even when using Precision Boost Overdrive.

The IceGiant ProSiphon Elite is a powerful, efficient, and cost-effective CPU cooler for enthusiast builds and represents an excellent alternative to high-end (and potentially dangerous) AIO water-cooling systems. The only drawback, if we are forced to find one, is its bulky size relative to typical heat pipe air coolers. If you’re thinking of adding this cooler to your build, it’s a superb choice – just make sure your case and other components have enough clearance. You can check out all the measurements and other specifications here.

Looking for more information about CPU cooling? We’ve got Community sections devoted to Cooling, CPU Cooler Buying Guides, and guides on How to Chose Parts for Your Custom PC Build. And if you can’t find what you’re looking for, don’t hesitate to post a new discussion and the Community will be happy to help!

Building a new computer? Head over to the Micro Center Custom PC Builder to ensure everything on your computer is perfect and compatible!