How to Choose Your PC Parts: RAM

If you’re reading this post, you’re probably here for one reason: you're starting a new PC build. Whether it’s your first time building or you’re an experienced builder and need some extra clarification, this post is for you. With all the options available on the market, it can be overwhelming, but we’re here to help break it down.

We’ll be going over how to choose your RAM. Like the motherboard guide, this one is going to be a little more “conceptual” without specific recommendations for a kit. Instead, we’ll go over what sorts of specs/features to look for based on your personal needs. 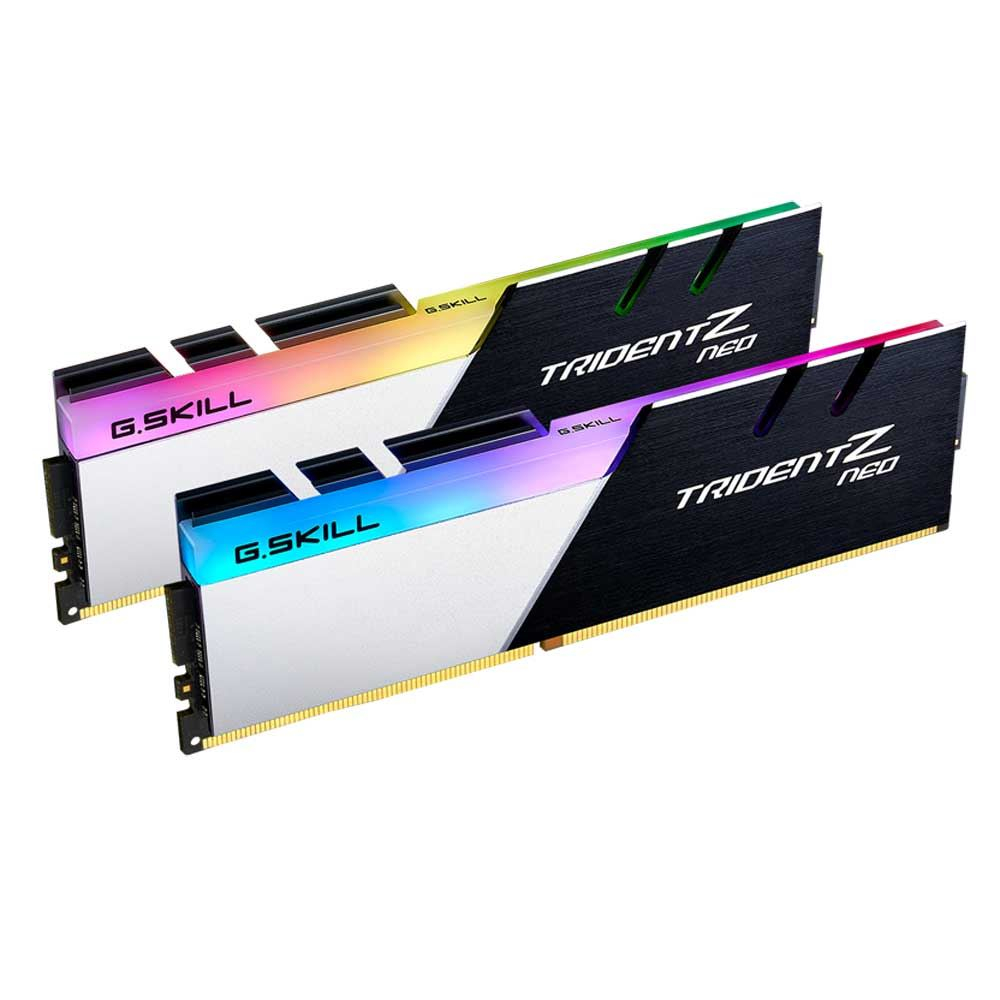 As always, some key questions:

Things to know when picking RAM:

What does RAM mean?

RAM stands for Random-Access Memory but is also known as “memory.” RAM is used as a temporary space to read and write data for active applications and windows on your computer. CPUs are much faster than a hard drive or SSD, and if your computer were only reading/writing directly from the drive, it would be very slow. Instead, we use RAM as a high-speed access point for your CPU to get the data that it needs.

DIMM is another term you’ll sometimes see used for memory. It stands for Dual In-Line Memory Module and is the technical term for an individual stick of RAM. Individual sticks of RAM are sometimes referred to as "RAM modules" or as a "memory module."

DDR stands for “double data rate.” The full acronym for what we currently call “memory” is DDR SDRAM - Double Data Rate Synchronous Dynamic Random-Access Memory. The full technical explanation of how it works is a little complicated, but in very simple terms, SDRAM would only transfer data once per clock cycle. In contrast, DDR SDRAM can do it twice, effectively doubling memory bandwidth.

The number after DDR specifies which type it is. DDR4 is the most current, preceded by DDR3, DDR2, and DDR. DDR5 will be coming in the future.

What is RAM speed?

RAM speed, or RAM clock speed, is how fast your RAM cycles, measured in Megahertz. DDR4-3200, for example, is DDR4 memory designed to operate at 3200MHz and is going to be faster RAM than DDR4-2400.

Something to clarify is that DDR memory isn’t actually 3200MHz, it’s 1600MHz, but because it’s double data rate, it’s effectively 1600 x 2 = 3200MHz, so it’s advertised that way. If you were to check the speed of the memory in Windows using monitoring tools, they’ll often report them at that “halved” speed. That doesn’t mean anything is wrong, it’s just the more technically correct way to display that information.

Yes. RAM speed is actually very important in a lot of situations. For basic everyday use like web browsing, emails, or word documents, speed won’t have much of an impact. But if you’re building a gaming PC or doing any other memory-intensive work, RAM speed can have a big effect on performance. Remember, RAM is a quick-access point for data your CPU needs to use, so if your RAM is slow, that data will be accessed slowly.

In games, particularly ones that are CPU intensive, performance differences can be quite pronounced when going from slow to high-speed memory.

XMP stands for “Extreme Memory Profile.” It’s a tool in your motherboard’s BIOS that allows you to run memory at its “full” speed.

Your motherboard will automatically scale down your memory speed to a default setting. DDR4 usually goes down to 2133. This is done because, even though a manufacturer will advertise RAM at a certain speed, your unique combination of motherboard and CPU could still cause stability issues with RAM. Enabling XMP on one board may work just fine, but use that same RAM on a different board and it may not boot with XMP turned on.

To get the RAM speeds as advertised, you need to enable that setting in your motherboard’s BIOS. Intel boards call it XMP; AMD boards will call it something else like aXMP or DOCP. Check your motherboard manual to be sure.

What are memory channels?

You may see kits labeled as single-channel, dual-channel, and quad-channel. These kits will come with one, two, or four DIMMs, or sticks of RAM, respectively. Memory channels are actually a feature on your motherboard, not the memory itself. Each DIMM has a certain amount of bandwidth available to send data through. More channels add more bandwidth, and in certain situations, this can lead to better performance (more on that later).

How do I make sure my RAM is compatible?

First, you need to match the RAM socket to the kind of motherboard you have. If your motherboard has DDR4 memory slots, get DDR4 memory. As DIMM slots are not backward compatible, you can’t use a DDR3 RAM kit with a DDR4 board.

Second, every motherboard has a QVL (qualified vendor list) of memory kits that have been tested and confirmed to be compatible. These lists should be available on your motherboard’s support page on the manufacturer’s website. If you can, it’s best to try and stick to memory on that list to ensure you won’t run into a compatibility issue. If the RAM isn’t on the QVL, it may not work.

One last thing when it comes to compatibility: when putting RAM in your system, we always recommend using exactly the same models if possible. Even if two kits are advertised at the same clock speed, e.g., DDR4-3200, there are other differences that can cause issues. Mismatching RAM can potentially lead to instability, losing performance, or your system not booting.

What kind of RAM should I get?

There’s no single answer to this question. Most memory will work perfectly fine, it’s just a matter of how much you want and what kind of speeds you need. There are some things we should cover to help point you in the right direction, though:

How much memory do I need?

One misconception some people may have is that more memory means your system will be faster, which isn’t really true. While it is true that when your RAM is maxed out, the computer starts placing some of that burden onto the disk (SSD or hard drive) in your system. This can have huge performance impacts because disks are MUCH slower than memory. Even if you have the fastest SSD in the world, if any resources that would normally be handled by RAM are swapped onto the disk they will be handled far slower.

However, the flip side is that any RAM beyond what you will regularly need is mostly pointless. Your daily processes only require so much RAM and, while it’s not a bad idea to go a little above and beyond for intense use situations, going overboard with RAM is just spending extra money for memory you’ll likely never use.

8GB of RAM is our minimum recommendation for general use, i.e., basic web browsing, email, and office work. With how RAM-hungry browsers these days can be (looking at you, Google Chrome), less than 8GB may not fulfill your daily use needs.

If you’re a gamer, 16GB of RAM is our recommendation. It leaves you enough wiggle room to run most games as well as additional software, such as internet browsers, simultaneously. While gamers could get by with 8GB of RAM, you’ll have to be careful about running any other applications. A number of games require 8GB of RAM as a baseline to run. If you’re not a gamer but are a heavy PC user in general, 16GB of RAM is still a good number to go with.

More than 16GB is overkill for most people, but in memory-intensive applications, such as high-resolution video and photo editing, high amounts of RAM can be useful.

What memory speed should I get?

The general standard for a modern system is DDR4-3200. It hits the sweet spot in terms of performance vs. price.

AMD Ryzen based systems scale well up to DDR4-3600. The difference between 3200 and 3600 isn’t massive, but there are benefits. Past 3600, you generally get diminishing returns and have to be careful with how you tune your memory (a whole separate discussion).

For Intel systems, past 3200 is where you’ll start to see diminishing returns. Also, remember that if you’re going with a more budget-focused Intel PC build and have a B or H chipset, those boards limit RAM speed depending on your processor. So, for example, if you have a B460 board with an i5-10400, getting more than DDR4-2666 would be pointless.

More channels mean more bandwidth for data to pass through. In some situations, it won’t matter. In other situations, it can actually have a very large effect on performance. Some video games, for example, can see very large performance games from dual-channel vs. single-channel memory. With how RAM is currently priced, you don’t really pay extra for having one DIMM vs. two and can get performance benefits from it, so there’s really no reason not to go with a dual-channel configuration.

Quad-channel will only make a difference in certain very memory-intensive professional applications; the average user or gamer will probably not benefit from it.

With all that in mind...

What memory kits should I buy?

There’s no one specific memory kit that you should purchase. There are many solid brands out there that make quality memory, so you should instead focus on capacity, speed, and price. If you’re interested in RGB RAM, there are plenty of good kits out there as well, but you’ll pay extra for the RGB lighting.

G.Skill, Crucial, and Corsair are all reliable brands that you can’t really go wrong with, and I’ll throw out some recommendations for a few different kits. As always, check your motherboard’s QVL list if you’re not sure about compatibility.

If you have follow-up questions, feel free to comment below, and if you’re still looking for part recommendations, we have guides for Processors, Motherboards, Graphics Cards, Power Supplies, Hard Drives, and Cases.