How to Choose Your Parts, Part 5: The Power Supply — Micro Center

How to Choose Your Parts, Part 5: The Power Supply

TSTonyV admin
May 1 edited May 11 in Help Choosing Parts

How to choose your parts part 4, Power Supply:

Welcome back to How to Choose Your Parts! If you’re on part 5, you’re close to completing your build. The power supply (PSU) is the last major internal component to select for a PC build. This is going to be a little more like parts 1 and 2 where we’re more concrete with our recommendations instead of focusing only on conceptual ideas. We only have one major question this time:

Without further ado, let’s get into it!

There are two major specifications to consider when choosing a power supply: the wattage and efficiency rating.

Wattage is pretty simple. It’s how much power your PSU can output. It’ll be designated by a number followed with the letter W, e.g. 500W, 650W, etc… This is the first thing you want to pay attention to.

If you’ve ever looked up computer power supplies you’ve probably seen them labelled something like “80+ Bronze,” or something similar. This is the efficiency rating. 80+ Plus certification is a standard that certifies computer power supplies of having at least 80% energy efficiency at 20%, 50% and 100% load. In other words, it wastes 20% or less of the electricity it’s drawing from the electrical circuit. It’s calculated based on the power output divided by the power draw. For example, an 80+ 500W PSU at 100% load would be outputting 500W of power and drawing 625W from the wall. If it was outputting 200W of power it would be drawing 250W from the circuit. 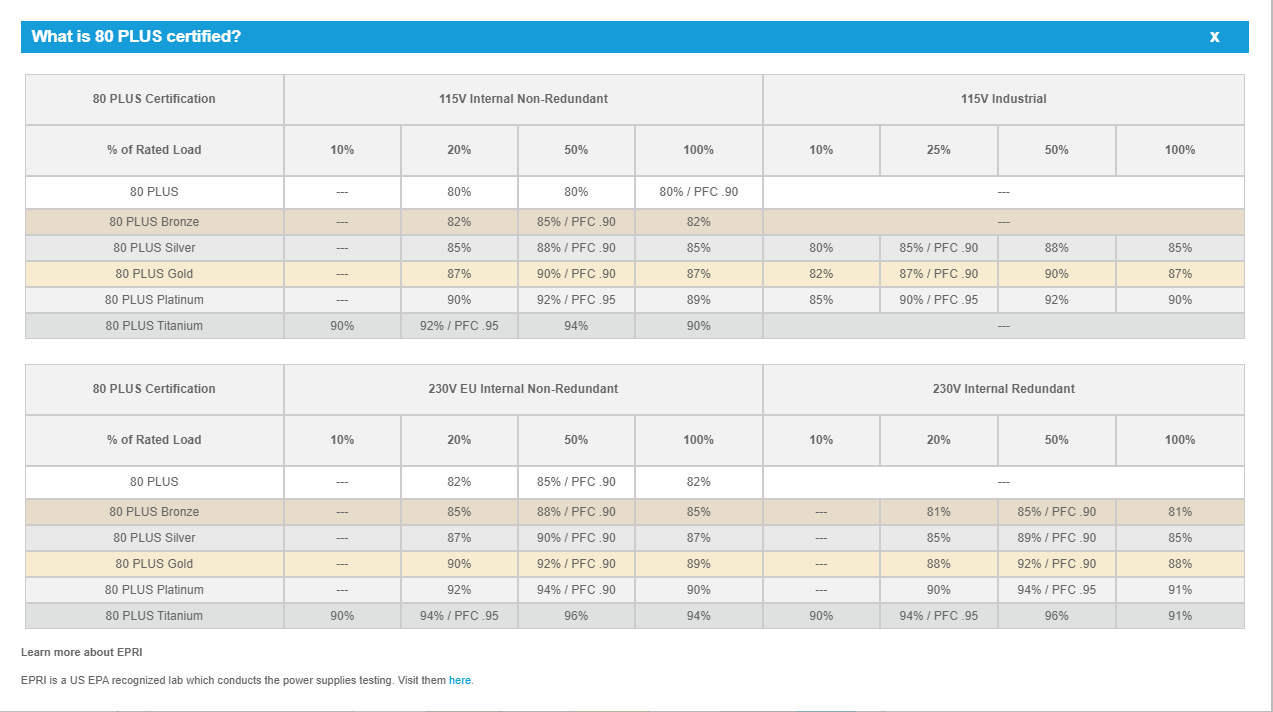 This image was sourced from https://www.plugloadsolutions.com/80PlusPowerSupplies.aspx#. You can find more information about the 80+ certification standard on that link.

When it comes to power supplies, we always recommend one that’s at minimum 80+, I’d personally go with 80+ Bronze or higher. Remember, the power supply is the heart of your system. That $20 500W PSU you saw you might be tempting when you’re on a budget, but every component is powered and driven by it: this is an area you don’t want to cheap out on. A bad PSU could ruin every single component in your computer.

How do I know how much power I need?

Every component in your system will draw a certain amount of power. As mentioned earlier, the GPU is generally going to be the highest power draw component, followed by the CPU.

One thing I’ll point out here is that you can easily plan for the future with your power supply. A 700W PSU isn’t going to overpower and ruin a 1660 Super, it will only deliver the amount of power that your components need. Spending the money now on a good power supply with a lot of headroom can save some money later if you plan to upgrade or rebuild your system. To go along with that, video cards are more power efficient now than they used to be and a 650W or 700W PSU should run any high-end card. I personally have a 750W Corsair RMX750 I’ve been using for four years now across many iterations of my build, now currently using an RTX 2080 super for my video card. When I first purchased it I didn’t need all 750W, but I knew at some point I was going to upgrade, so I decided to leave myself room. Not having to purchase another power supply saved money later on.

For those of you wanting something more exact, or who are running multiple GPUs, the alternative method is figuring out the power draw of all the components on your system to get a total.

The recommended PSUs manufacturers list for their GPUs are set with the power draw of the other components of your system in mind and assuming you’re only using a single GPU. The GPU itself isn’t drawing that much power on its own. For example, that 2080 Super we mentioned that recommends a 650W power supply? In reality it will probably draw around 250W on its own at stock settings under heavy load. CPUs are the same way: they only draw so much power under heavy load. High-powered CPUs like the i9-9900k when under can potentially draw upwards of 200W or more in certain conditions, but it’s not going to saturate your whole power supply by itself. If you can determine what the power draw of all your components is (including not just CPU and GPU, but RAM, hard drives, SSDs, etc…), you can figure out the total power draw and choose a PSU accordingly. You’ll have make sure you research thoroughly if you go this route.

If you plan on overclocking, you have to account for that as well because you’ll be increasing your power draw.

What power supplies do we recommend?

As I mentioned earlier, I would personally not go with anything less than 80+ Bronze, and I want to re-emphasize that the power supply is one thing you absolutely should not cheap out on. You don’t have to buy the craziest, most expensive 1500W 80+ Titanium PSU if you’re making an entry-level gaming PC, but don’t pick a random no-name PSU because it’s cheap. 80+, 80+ Bronze and 80+ Silver are good for entry level and low mid-range builds. For upper-mid range or higher end builds, I’d try to stick with 80+ Gold or better. And remember, just because it’s an entry level build, doesn’t mean you can’t get yourself a nice 80+ Gold 750W or 850W power supply. Entry-level performance still likes high quality power, and good power supplies will last you a very long time.

I won’t recommend specific PSUs since that should be chosen based on your power needs. It’s also best to evaluate power supplies individually, even going by general brand isn’t always a good idea. Many brands will produce very high-quality lines of power supplies while also having some that are poor quality. There are several lines of PSUs from different manufacturers that are generally known for being high quality, and I’ll mention a few here:

In general, any of these are reputable (there are more out there than just the ones I mentioned). You’ll notice many of these are very high end, which is intentional. There are more budget-friendly options out there like the Corsair CX/CXM series, the Cooler Master Masterwatt series and our own Powerspec power supplies, but the budget options can sometimes be riskier if you're not careful which one you choose. At the end of the day you really need to do your research. Always check reviews from multiple sources to be safe, whether you’re on a budget or looking at super high-end options. And again, I can’t say this enough, remember that your PSU is the heart of your system. If there’s one thing in your computer that you should never compromise on, it’s the power supply.

That does it for part 5! This is the last of the major internal components, we're getting close to a full build at this point. If you have any questions feel free to comment below, and make sure you go check out Part 6: SSDs and Hard Drives!